Moose Production Day: A Signal to Start the Season 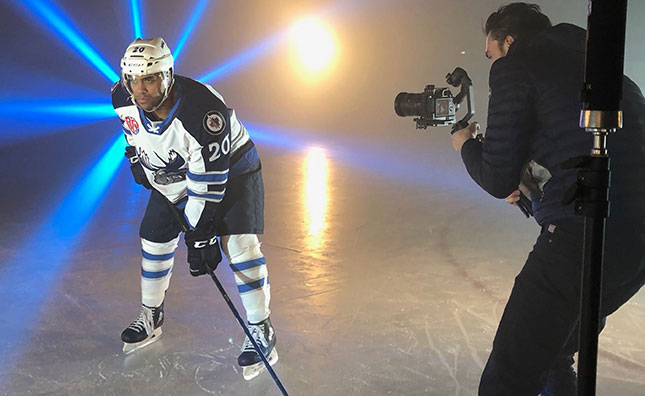 As Manitoba Moose fans intently watched the first practice of the season, a slightly different scenario emerged from down the smoky corridors off RE/MAX Arena at the Bell MTS Iceplex. On Oct. 1, groups of players filed in and out of dressing rooms and rinks outfitted with state-of-the-art production gear for the team’s annual production day.

After more than a month of planning, the production team captured headshots, action shots, social media clips, and Jets Gear promotions to be used in the upcoming months for the Moose season, including for three upcoming promotional games.

Manager of Game Presentation Ross Clark wanted to keep things simple but compelling for the fans.

“It was really neat going into the rink section and seeing all the haze and lights in action. The guys have done a great job bringing the ideas we’ve worked so hard on to life. Production day was a lot of fun.  I think fans are going to love the result.

Clark was with the team for most of last season, giving Moose fans a great game day show. However, this was his first experience with Moose production day.  He enjoyed getting to know the players in a casual and fun setting, away from the pressures of the rink.

“It’s been enjoyable interacting with the players, even passing them the puck for certain shots we needed. One of the guys said their nine-year-old has a harder shot than me,” laughed Clark.

Although just one day, Clark and his team had a full off-season of planning and coordinating the shoot so it ran as smoothly as possible. The production team shot a total of 29 players throughout the day knowing some will play with the Moose right away, while others are likely to be called up from their ECHL affiliate Jacksonville Icemen later in the season. 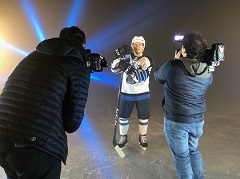 “These days are always fun,” said forward C.J. Suess. “Any time you can get in front of a camera and have a good time, it’s a pleasure.”

For Suess, who had a stand-out preseason with the Winnipeg Jets and started the season with the Moose, this was his first experience with a full-scale media day.

“It definitely means the season is coming. It’s exciting to get going.  It’s a new experience for me, and I’m ready to get to it.”

“We’re not used to this at the junior level. The production isn’t to the full extent as this,” said forward Skyler Mackenzie.

“This is the first time ‘officially’ being a part of a production day. It’s pretty cool and exciting to have all the lights and smoke going on. It definitely gets you pumped up for the season, and that we’re that much closer to the first regular season game.”

With numerous moving parts throughout the day, part of the plan was getting to know the new players. Players filled out a questionnaire to give the Moose Community Relations team an idea of their interests, and which theme nights or charity games they might be interested in supporting.

“It’s the first time we’ll spend some significant time with some of the new players.  It gives us the opportunity to sit down with them and find out what they may be interested in doing in the community,” said Daniel Fink, Manager of Hockey Communications for the Manitoba Moose.

“Some of the guys come in with plans of what they’d like to do or be involved in, whether it’s with Special Olympics or the Winnipeg Humane Society, for example.”

Fans can catch their favourite Moose players on the ice and out and about in the community this season.  The first chance to see the striking visuals from production day is Friday’s home opener when the team debuts its 2018-19 roster and game presentation at 7 p.m. against the Belleville Senators.  To purchase tickets visit moosehockey.com/tickets.