The Manitoba Moose took a break from their usual routine to make their annual stop at Siloam Mission on Wednesday morning.

The team split into two groups for their visit at the downtown resource centre, drop-in and shelter.  The first crew rolled into the kitchen to prepare food for breakfast and lunch, as well as work the serving line for breakfast.  The second crew dispersed into the dining room to help community members with anything from serving meals, to refilling coffee and clearing plates.

Whether behind the counter in the kitchen, or out on the floor, the morning gave Moose players an opportunity to spend time and chat with members of the community using Siloam Mission’s services.  According to Moose captain Peter Stoykewych, a common interest brought everyone together. 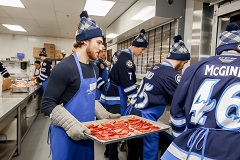 “You get to see the passion people have for hockey.  It was nice to be able to come here and interact with a lot of the people and have conversations with people we’ve never met before.  They’re just as passionate about hockey as everyone else here in the city and I’m glad we were able to find something in common to chat about.

The Moose have visited Siloam Mission each year since the team made its return to Winnipeg in 2015.  Stoykewych is always impressed by what he sees the volunteers contributing to the Winnipeg community.

“It’s great to come back every year.  It’s something we take a lot pride in.  You have a lot of respect for the people who do this year-round.  Obviously we’re only here once a year, but you see the good they do for the community and its nice to be a part of it, even just for one morning.”

Siloam Mission Chief Executive Officer Jim Bell was on hand to see the team working around the facility.  A goaltender in his younger years, Bell enjoyed seeing the energy the players brought as they worked around the kitchen and dining room.

“It means everything… to us as an organization, to the people who walk in our building on an every day basis, but particularly today.  Everyone saw the energy with the team in the room and Red River Co-op here.  It just means everything.  There are a lot of sports fans who walk in our building every day, very knowledgeable, very interested… passionate about the team and I saw some of the interaction.”

During the Month of November, Moose fans donated 1,446 pounds of winter clothing to Siloam Mission through the Share the Warmth Campaign presented by Red River Co-op.

Bell was appreciative of the donation and conveyed his gratitude for the contributions of the hockey club, sponsor Red River Co-op and the generosity of Winnipeggers.

“We’re very grateful, and of course with the volume of clothing that was donated and received.  So in every way, from the donation of clothing, to the energy in the room, to the service by the team.  Tremendous ambassadors, we’re very grateful to all of them as hockey players, and as young men, contributing to our community.”

While Moose players were taking the time to give back, they also got something out of the experience.  Stoykewych relished the opportunity to spend time with his teammates in a new setting.

“You learn a lot about people when you get away from the rink and you get to see them in different environments.  You could see the upbeat attitude and the positivity that was flowing through the kitchen and the building here today.”

The Moose get back on the ice tomorrow at Bell MTS Iceplex as they get ready for a weekend matchup against the Toronto Marlies.  The games go Friday and Saturday at Bell MTS Place, with Saturday’s game featuring the team’s annual Teddy Bear Toss presented by Red River Co-op.  Tickets are available moosehockey.com/tickets. 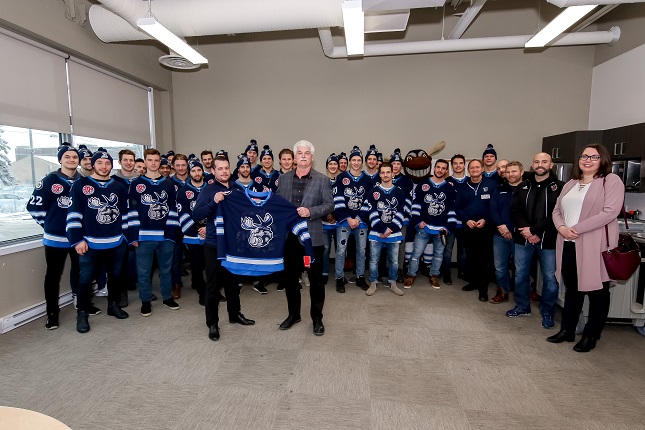