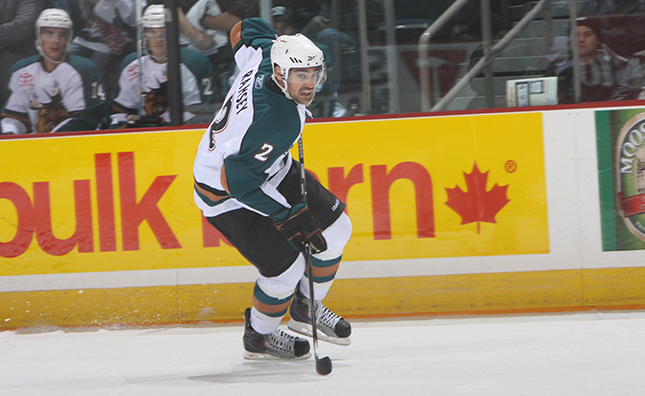 Following two seasons with Ritten Renon (Italy-A), Travis Ramsey was ready to return to North America and leave the game of hockey behind for good. However, life had other plans.

“At first I kind of just wanted a clean break,” Ramsey said during a phone interview. “I was so torn as to whether to retire or not when I stopped playing. I was like okay, I’m done, I am going to concentrate on working for a while so I kind of stepped away… but then my son started playing.”

Ramsey’s passion for hockey was reignited when his four-year-old son, Grayson, stepped onto the ice and found his own love and connection to the game.

“Seeing it through his eyes is a whole other experience,” Ramsey said. “There’s nothing for me out there it’s all about just making sure he has a good time. I don’t really care how he does or what happens out there, but if he’s smiling and having a good time, it just makes that connection between him and I in that we’re both enjoying the same is really cool to share.”

The former Moose defenceman totalled 58 points (9G, 49A) in 305 career AHL games with the Winnipeg organization, split between the St. John’s IceCaps and Manitoba Moose. Ramsey holds a place in the franchise record books as he is currently ranked in the top-10 among Manitoba’s all-time career leaders in games played.

The Lakewood, Calif. product reminisced about his time with the Moose and recounted the role models on the squad that inspired him not only from their play but through their character.

“{Mike} Keane,” Ramsey stated. “I think if you talked to anyone, I know he’s still involved with the Jets, that you can’t find a better leader than that guy. I got to learn a lot from him both hockey wise and just being a person…Nolan Baumgartner, Cory Schneider, Rick Rypien, Marco Rosa, Guillaume Desbiens. So there were a lot of guys, like {Jason} Jaffray, who have been around the Moose organization for a long time, who were very loyal to the team and just really great guys.”

Playing under an exemplary leadership group, Ramsey gained a sense of camaraderie with his teammates and found a home with the club. “This was a core group of guys that you just wanted to be a part of,” Ramsey said. “It was really special back then, as I’m sure it is today.”

Looking back on his time with the Moose, Ramsey reinstated his pride in spending his hockey career with the organization and his hopes that those who walk the halls after him will never take it for granted. “Savour every minute of it,” Ramsey affirmed. “It’s a special period of your life.”

Ramsey is currently living in Portland, Maine with his wife Brooke and their son. “My wife is from here originally,” Ramsey explained. “The deal was when I stopped playing that it would pay off for her because we would move back to her home state and area. I have no complaints because I love it here. It’s a great place to raise a family.”

Ramsey is the Manager of New Business Development/Sales for Creative Imaging Group, a company that specializes in print distributing and advertising. Ramsey’s transition from professional hockey to an office job was not an easy one.

“It was definitely tough,” Ramsey laughed. “My wife took one of those first day at school pictures you take with your kids. I felt like I was going back to school.”

Ramsey detailed the learning curve of working a new job, adjusting to a new time schedule and modifying a daily routine he had been following his entire hockey career. Despite the trails of changing career paths, Ramsey credited a key attribute he knows all too well from his time on the ice and how he used it to find success in his new profession.

“What carries over pretty strongly is the competitiveness,” Ramsey said. “Not necessarily against someone else but even just with yourself. You’re always trying to be better.”