From the Stands: Big Ice a big deal for minor hockey players 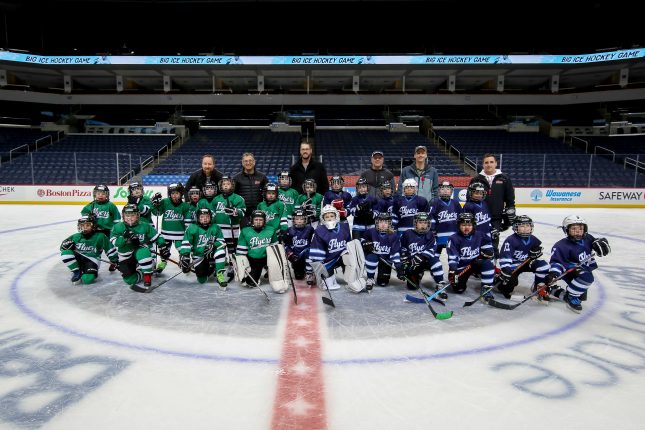 Originally published in Game On Magazine

The immediate appeal of the Manitoba Moose Big Ice program is, of course, the chance for Manitoba’s youngest hockey players to enjoy a big league experience and sink their skates into the tracks of their favourite Jets and Moose players on the ice at Bell MTS Place.

But having participated in the Moose Timbits Hockey initiative last season, hockey mom and team manager Shay-Lee Bolton knew the on-ice opportunity is only part of what makes the experience so worthwhile, not only for players but for parents as well.

“They were all really pumped to be on that kind of ice surface where the (Jets and Moose) players play and I think it was also fun for them to be able to go to the game together as a team,” said Bolton, noting that as exciting as the ice time was, the connections that were made among players and among parents were the most positive aspect of the experience.

Bolton was eager to give her son’s 2018-19 team, the Fort Garry North 7-8 Jets Blue, this same bonding experience through the Moose Big Ice program, which starts at the novice level.

“The kids really bonded over what was an exciting moment for them and I think it gives them motivation to work harder, try harder to know what it feels like to have that experience that the pros have, even at a young age.”

Bolton’s son Atticus, 7, was one of only a few Jets Blue players who had skated at Bell MTS Place before as part of the Timbits program. While the opportunity was a first for most, Big Ice more closely mirrors a professional game experience which made it a very big deal, even for the Timbits veterans. 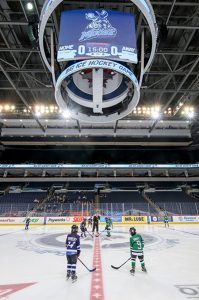 “It was most exciting when we took faceoffs,” Atticus said, also noting how cool it was to hear his name being announced as he headed onto the ice to start the game. “I was excited because it was really fun to play where the Jets and Moose play.”

Big Ice games consist of three 15-minute running-time periods and the Fort Garry players got to take their shifts from the home bench, which was not lost on the young squad, or the coaches who joined them behind the bench.

“It was so exciting for the coaches and the players to sit on the actual bench that the players sit on, see the screen that Paul Maurice looks at when he’s in there and just have that vantage point,” said Bolton.

Bolton is not sure who it was more exciting for, the kids or the spectating families; hearing the goal horn blow after each goal and hearing the names of the players who scored and assisted echo through the arena was a definite thrill for everyone.

“So many family members were there to watch – parents and grandparents, it was just a big deal and everyone was very proud.”

With new memories made, everyone had a lot to talk about as the team made a night of it with dinner nearby before returning to the arena to watch the Moose take on the Grand Rapids Griffins.

“It was a real team bonding event,” said Bolton. “Walking from Bell MTS Place to Boston Pizza for dinner, all the kids sat together – just the great spirit of the whole evening and a great way to get to know the other families and the other kids.”

Back at the arena, the Moose provided the excitement while the kids soaked in the fact that they had just been skating on the same ice as their hockey heroes. 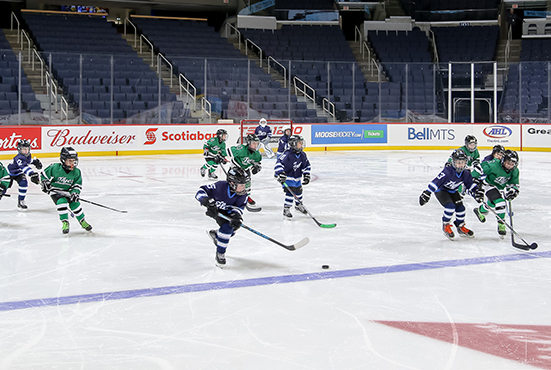 “The kids had a great time, they got on the scoreboard a couple of times, had snacks, were cheering for the Moose, excited to see some of the players that they recognized from camp and from being called up to the Jets. It was a huge day for them in their lives – something they’ll remember for a very long time.”

The Manitoba Moose Big Ice program is open to minor hockey teams ages 7-12. All skaters get a free ticket to the day’s Moose matchup with discounts for coaches, parents, friends and family, and team bonuses for ticket sales. For more information or to register your minor team, visit moosehockey.com/bigice.