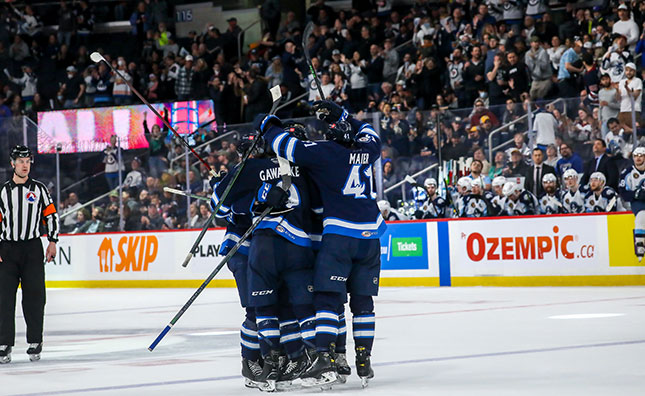 The Manitoba Moose were on the brink of elimination. After outshooting the Milwaukee Admirals by an 86-37 count in the first two games of the Central Division Semifinals, Manitoba found itself trailing in the series 2-0. The Moose scored just three times in two games on those 86 shots. Admirals netminder Devin Cooley was sensational and timely scoring made the difference for Milwaukee.

With the Moose and Admirals in a two-three format for their best-of-five series, the set shifted to Winnipeg with all the pressure on Manitoba.

The Moose matched a franchise record with 25 wins at Canada Life Centre during the regular season. The club set a new franchise mark with a .722 points percentage. That ranked Manitoba fourth in the AHL. A confident team at home, backed by fans excited for the return of the Calder Cup Playoffs.

“I think everyone loves playing on this ice, the best ice in the league,” said Moose defenceman Declan Chisholm ahead of Game 3 of the series. “We’re super excited and I think we’re a different animal on our home ice. I think we’re going to come out with a lot of energy here.” 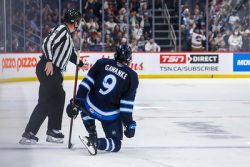 It took the Moose a period to find that energy. The Admirals jumped out to a quick 2-0 lead in the opening 20 minutes which may have had Milwaukee fans reaching for their brooms. Manitoba closed those thoughts out quickly in the second period. The Moose scored three straight goals in the middle frame, before tacking on another pair in the third for a 5-2 win. The team had life in the series.

The antlered ones weren’t about to rest on the lone win with Game 4 looming on Friday.

The Moose found that home energy early on Friday with just shy of 5,000 fans at Canada Life Centre. Manitoba opened the scoring for the first time in the series and came out of the first period tied 2-2. Once again the second period proved fruitful as the Moose rattled off another three-goal middle period. A little more insurance in the third resulted in another emphatic victory to the tune of 7-3. The final 10 seconds of the contest were deafening as an elated crowd cheered the Moose on to Game 5. 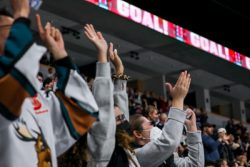 “The fans have been awesome. I think just seeing the support they’ve been able to come in and give us and the momentum has been unbelievable,” grinned Morgan Barron after a three-point outing. “After the goals you really feel it, it picks us up and the guys get going on the bench. It’s been another part of home ice that’s been hugely advantageous.”

“It’s amazing, it’s crazy crowds,” said goaltender Mikhail Berdin following Moose practice on Saturday. “When you focus in the game you don’t think about it much, but when good things happen and you hear the crowd it makes it amazing.”

The Moose are gaining momentum and energy from the stands at Canada Life Centre and paying it back in full on the ice. Now with the series tied 2-2 and a decisive Game 5 on Sunday, just how loud will it be?

Tickets for Sunday’s Game 5 are available at MooseHockey.com/TICKETS. Puck drop is scheduled for 2 p.m. CT at Canada Life Centre. The winner advances to the Central Division Finals.