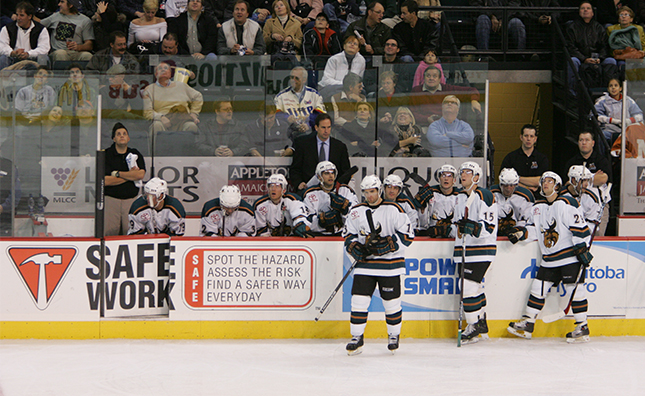 In celebrating its commemorative 20th season, the Manitoba Moose Hockey Club is reflecting on those who created a legacy within the franchise.

The AHL is a league where players develop their craft in hopes of advancing their career to the NHL. Manitoba celebrates not only the players who have thrived because of the opportunity to grow in the AHL, but also its head coaches.

Many Moose players who have started their career on the ice, later transferred their skills to a spot in the coaches’ room.

“It started with Randy [Carlyle],” Executive Chairman of True North Sports + Entertainment Mark Chipman detailed. “It came to him very naturally, he had a lot of those qualities as a player, those leadership qualities. I don’t think it came as a surprise to [Craig Heisinger] and I that he had the success that he had.”

“I was kind of in the support role, more an assistant and kind of getting my feet underneath me of learning how to really build a hockey club,” Carlyle reflected about his early years as a coach. “There’s a lot more to it than what people would normally think and what meets people’s eye on the front of it. They look at the hockey club and just see what happens on game night. There’s a lot of things that take place before the team ever gets to the ice surface and we were all part of it.”

During the 1996-97 campaign, Carlyle was promoted to take on the roles of general manager and head coach for the Moose. He went on to spend four seasons as the general manager of the club and five as the head coach. Carlyle explained how he wanted to branch out and demonstrate his experience at the NHL level. From 2002-04 he was the assistant coach of the Washington Capitals under bench boss Bruce Cassidy. Lo and behold, just two years later, Carlyle found himself right back where he started – in Winnipeg. Carlyle was the head coach of the Moose for the 2004-05 season before moving on to spend 13 seasons split between the Anaheim Ducks and Toronto Maple Leafs. 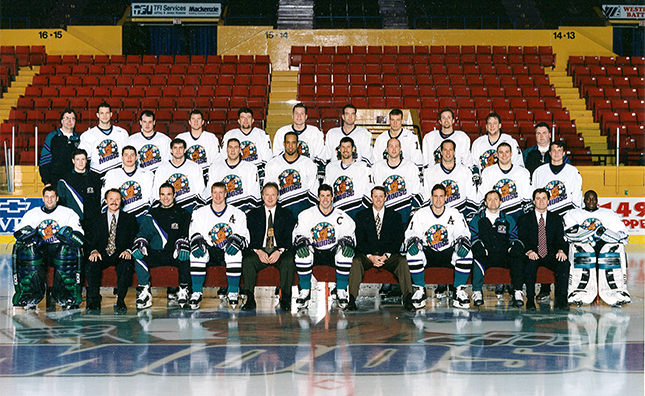 Carlyle was the first of four consecutive Moose coaches to go on to accept a lead role with a club in the National Hockey League. The coaches proceeding Carlyle that went on to coach in the big league were Alain Vigneault, Scott Arniel and Claude Noel.

“We take a great deal of pride in the fact that we had so many coaches that went on,” said Chipman. “That’s what we felt our role was as an organization is to help those guys get to the next level as we did with players. There wasn’t some secret blueprint that we wrote one night. It was just a matter of identifying really high-quality people and giving them the full canvas to do what they have the abilities to do.”

The destined evolution of Manitoba’s head coaches later joining an NHL team was no secret. Carlyle laughed when asked about the successful string of coaches that have reigned for the Moose.

“We’d like to say it was the water,” Carlyle joked. “It was more of the support that we got both from the Vancouver organization and the Moose organization. There was an understanding that we were here to develop hockey players for the NHL but, on the other side, there was a component that was important in that this team had to have success here in Manitoba. The ultimate goal was to one day bring NHL hockey back to Winnipeg. That would have been hard to do that by not having any sort of success here.”

The qualities these leaders held that lent to their success as coaches go beyond what they exhibited in the coach’s office. Like Carlyle, Arniel relied on his on-ice character to become a force behind the bench.

Arniel spent his final three seasons on the ice playing for Manitoba. After his retirement following the 1998-99 campaign, he stayed on with the team as an assistant coach. Arniel is another example of former players have lent a hand in molding Manitoba’s organization. Throughout the years, franchise favorites have stayed with the team in some capacity. The commitment that Manitoba shows its players and staff gives them the means to succeed, and that isn’t taken for granted.

“I mean, we were an AHL team but our relationship with Vancouver at the time was excellent,” said Arniel. “We were allowed to bring in some of our free agents like Jason Jaffray, Mike Keane and Nolan Baumgartner. Those guys to really make our team stronger, not only just strong on the ice, but strong in the community. It helped me as a coach, it was a great situation to learn, to come in here and it gave me an opportunity to move forward.”

One of the many attributes that Manitoba’s organization is celebrated for is the loyalty it shows to its fans, players and staff. You don’t just belong to a hockey team; you belong to a family.

“We were loyal,” said the current General Manager of the Moose, Craig Heisinger. “We settled in a real good solid string of coaches, not guys with a lot of experience but guys who were given the opportunity much like myself to cut our teeth with an organization and learn what it was like to do business on the other side of the bench.”

The many coaches who have walked the halls of Bell MTS Place not only knew they were a part of a hockey franchise, but they belonged to something more than that. It was a space to grow with a community behind them.

The current head coach of the Moose, Pascal Vincent, has led the team since the 2016-17 season, previously serving in the NHL as an assistant for the Winnipeg Jets for five seasons. After being awarded the Louis A.R. Pieri Memorial Award as the AHL’s top Head Coach in 2017-18, Vincent is demonstrating the same qualities the Moose pride themselves on having behind the bench. An ideal example to lead us into the next 20 seasons.

The Manitoba Moose Hockey Club will host its 20th Season celebration on Friday, Feb. 7 with the team’s 20th Season Game. The Moose host their long-time rivals, the Chicago Wolves in a 7 p.m. matchup. Tickets are available at moosehockey.com/tickets or through the Moose Mobile App.