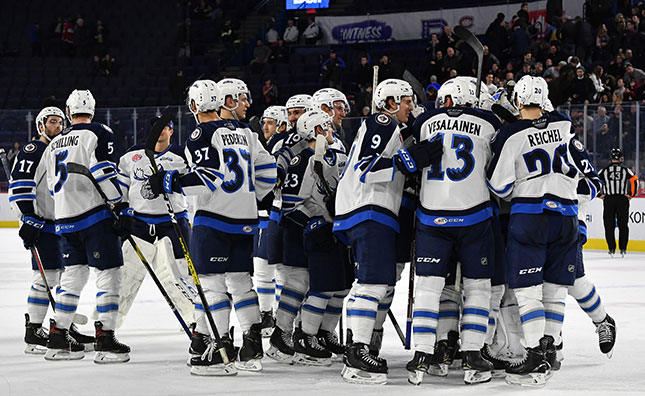 With the Moose celebrating their 20th Season during the 2019-20 campaign, we’ve spent plenty of time looking back on the past two decades of Moose hockey in Manitoba. With the season At an end it’s a good chance to look back on some of the big moments in the near past. This series focuses in on some of the exciting action from the 2019-20 Moose season.

We start late in the campaign with a thrilling come-from-behind win in Quebec on Feb. 19, 2020.

The Moose hit the road for three games in Eastern Canada in late February. The club was fresh off a series split against the league-leading Milwaukee Admirals back in Winnipeg, and looking to improve its standing. The Moose started out with a pair of games in Laval before heading to Belleville for the finale. Both teams had struggled in the goal column coming into the game. Manitoba and Laval had scored a combined 12 goals in 10 games… something had to give. 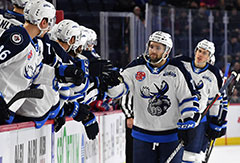 The Moose blasted out of the gate, scoring twice in the first 6:11 of the hockey game. Seth Griffith got things going with his 20th of the season just 4:26 into the contest. Emile Poirier started the rush with a little chip at the Moose blueline, leading to a two-on-one with Michael Spacek and Griffith. With a nifty delay and no-look feed, Spacek set up Griffith for a tap-in. It was the third time in Griffith’s career the veteran forward reached the 20-goal plateau.

The next Moose goal wasn’t nearly as pretty. It started out pretty slick as David Gustafsson rushed the puck up ice before handing it off to Kristian Vesalainen. The Finnish forward cut to the middle of the ice and fired a shot that disappeared into a crowd in front of netminder Keith Kinkaid. After a couple whacks from Gustafsson, the puck ricocheted into the goal to give the Moose a 2-0 lead. The tally went down as Gustafsson’s first goal and point in the AHL.

The second period wasn’t as rosy for the Moose. Just across the halfway point of the frame the Rocket broke onto the scoreboard courtesy of a Cale Fleury tally on an odd-man rush. Three minutes later, a pass from below the Moose goal line bounced off Yannick Veilleux and into the Manitoba net to tie the game. Late in the period the home side was at it again as Jake Evans found a rebound and popped it past Mikhail Berdin. The blitz of three consecutive goals sent Laval to the third with a 3-2 lead.

Manitoba bounced back from the tough second period in the third. Vesalainen broke the Moose into the offensive zone nearing the 10-minute mark of the 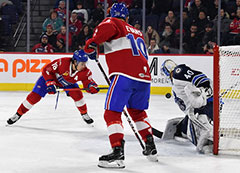 period before sliding the puck over to JC Lipon. The veteran forward spied Leon Gawanke down low in the zone and slid the puck right into the rookie’s wheelhouse for a one-timer that nicked the post on its way in. The Moose weren’t on even terms for long, though, as the Rocket regained the lead with 6:36 to go. Karl Alzner just held the puck in the Moose zone, and 2018 third overall pick Jesperi Kotkaniemi set up Charles Hudon in front for the go-ahead goal.

The roller coaster contest continued to roll into the final moments of regulation. With the teams skating four-on-four, the Moose were able to call Berdin to the bench for an extra attacker and a power play in all but name. The furious push was on. After snagging his own rebound following a blocked shot, Spacek was able to reset the play for Gawanke. The defender slid the puck over for Cameron Schilling, whose one-timer was stopped by Kinkaid, but the rebound went straight to Spacek who pounded the puck home.

Overtime saw the Moose awarded a power play, but they couldn’t make good on the opportunity. Berdin kept the contest going with a lunging pokecheck on Fleury following the man advantage, one of three saves in extra time. That sent the contest to a shootout. 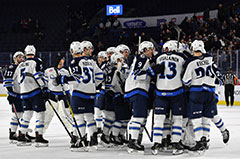 Berdin opened things up with a save on Kotkaniemi. Griffith went to work and put his great hands on display with a dazzling set of moves to slide the puck past Kinkaid. Berdin took care of the rest, stopping veteran Phil Varone and unleashing the pokecheck once more to turn away Hudon. The Moose celebrated a 5-4 shootout victory after battling back to tie the game twice in the final frame.

Leon Gawanke posted a goal and an assist in the win. The multi-point effort was one of four the German defender put forward this season. Gawanke also led the Moose with four shots on goal.

Kristian Vesalainen and JC Lipon each recorded a pair of assists in the win as the duo, lined up with David Gustafsson, provided key offence for the Moose in the contest.

Next week I’ll break the rules (already) and recap a weekend set of games from November. Those contests were the launching point for a great Moose success story. They also featured two of the best offensive performances from Manitoba’s season.