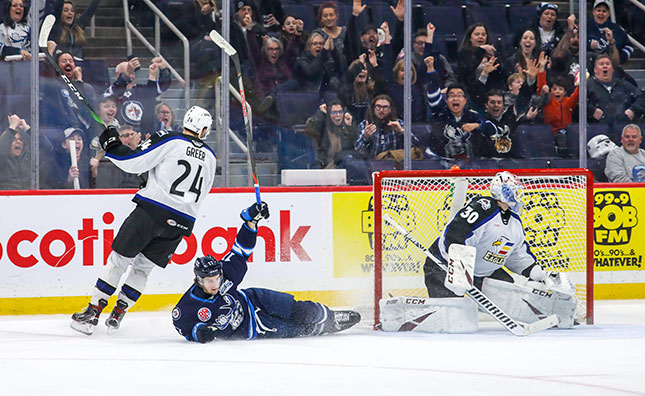 With the Moose celebrating their 20th Season during the 2019-20 campaign, we’ve spent plenty of time looking back on the past two decades of Moose hockey in Manitoba. With the season in the books, it’s a good chance to look back on some of the big moments in the near past. This series focuses in on some of the exciting action from the 2019-20 Moose season.

We close this series with one of the most exciting finishes of the Moose season in a 4-3 overtime win against the Colorado Eagles.

After a sweep of the Rockford IceHogs to finish out 2019, the Moose dropped a 1-0 decision to the Colorado Eagles to open the new year. It was a frustrating loss for the Moose who outshot the Eagles 30-23. They also held back an Eagles offence that had scored three or more goals in seven consecutive games. The problem was Adam Werner. Winnipeg Jets fans will remember that name from Werner’s NHL debut when he stopped all 40 Jets shots he faced after coming in for an injured Pavel Francouz in the Colorado Avalanche net. Between the NHL and AHL, the Eagles netminder made 70 consecutive saves at Bell MTS Place coming into the action on Jan. 4.

The first period saw Werner push that total to 81. Both the Moose and Eagles racked up 11 shots on goal, but Mikhail Berdin and Werner held firm at both ends of the ice. Berdin’s toughest test came off a Kevin Davis rush 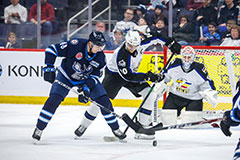 as he caught Manitoba defenders flat-footed and was able to get in on goal before being turned away by the Moose netminder. Meanwhile Werner faced plenty of action from the left side of the ice in the opening frame, including a blast from Logan Stanley.

Berdin was called upon to make four early saves in the second period. Again the young goalie kept the contest on even terms and the Moose were granted an opportunity to turn the momentum on the power play. With Manitoba set up in the offensive zone, Kristian Vesalainen worked the puck into the middle for Andrei Chibisov. A quick one-timer from the Russian forward found its way past Werner and the Moose were on the board with their first shot of the frame. After not allowing a goal on 81 consecutive shots at Bell MTS Place, Werner found himself having allowed goals on two straight chances. Kristian Reichel got his stick on an attempted Eagles dump-in and the deflection sprung Brent Pedersen on a

breakaway. The streaking forward moved to his forehand and lifted the puck past Werner. There was initially some confusion as the puck perfectly stuck in between the back post and the netting, but the goal was quickly awarded after a Reichel pointed out the puck’s location.

The two-goal edge didn’t last long as the Eagles got on the board just 1:41 later. A long pass from Shane Bowers was redirected in front of the Moose goal and the rebound went right to the stick of A.J. Greer. The power forward was able to flip the puck into a mostly open cage to get Colorado on the board. That was it for scoring in the second as the Moose came out of the middle frame with a 2-1 lead. The club had to be l0efficient with its chances, scoring on two of just three shots in the period. Berdin stopped 10 of the 11 shots he faced as the Moose went to the third looking for their first victory of 2020.

Kristian Vesalainen put the Moose back in solid control of the scoreboard before the period was four minutes old. After Cole Maier took a hit to make a play to Vesalainen below the goal line, the forward stepped out in front of the Colorado net and snapped a quick shot through traffic to restore the two-goal edge. Once again, the Eagles had the answer. A little more than four minutes after the Vesalainen tally, Michael Joly’s centring feed deflected into the Moose net off a defender to cut the Manitoba lead to 3-2. After the Moose were unable to cash in on a late power play, the Eagles struck again. A flurry of chances eventually ended up with the puck bouncing to veteran forward Erik Condra who potted the tying marker with five minutes left on the clock. The teams were only able to record a shot each the rest of the way and rolled into overtime tied 3-3. 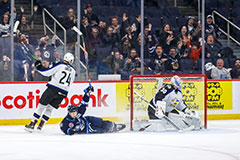 Cameron Schilling recorded the first two chances of the overtime period, but was thwarted by Werner on both tries. After Schilling’s chances the Eagles put the puck back into Moose territory. Sheldon Dries nearly came up with the puck behind the net, but Mikhail Berdin put his body into the forward and was able to win the puck battle. With the 5,100 in attendance on their feet, Berdin slid the puck off to Michael Spacek who launched a feed from the corner of the Moose zone all the way to Seth Griffith lurking at the Colorado blueline. With a step on the defender, Griffith was able to shield the puck and wait for Werner to drop his shoulder. Griffith then lifted the puck over the netminder and sent Bell MTS Place into a frenzy celebrating a 4-3 victory.

Kristian Vesalainen picked up a goal and an assist in the win. In a span of three games, Vesalainen had five points (2G, 3A) as the Moose picked up wins in two of those contests. The two-point effort was the fourth of six multi-point games for Vesalainen on the season.

Seth Griffith’s overtime winner was his second of the season after previously ending a Nov. 15 matchup against San Antonio. The Wallaceburg, Ont. product is one of 12 players to record multiple overtime winners this season. Griffith leads the Moose with four overtime winners since joining the club in 2018.

This wraps up our look at some exciting games from the 2019-20 season. I’m looking forward to calling more thrilling action when the 2020-21 season gets under way for the Moose.