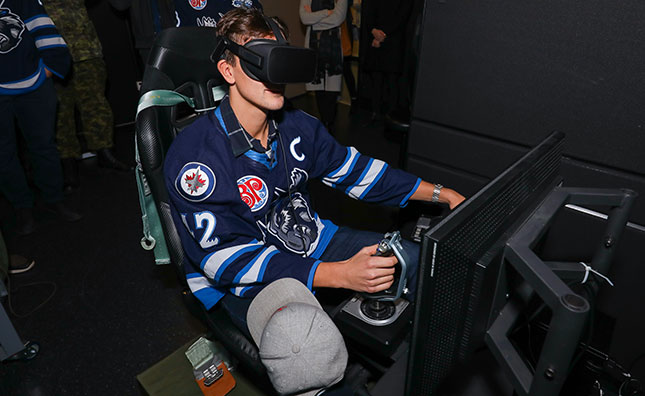 Members of the Manitoba Moose changed up their afternoon routine on Wednesday as they paid a visit to CFB Winnipeg. The visit gave players a chance to  learn more about some of the training members of the Royal Canadian Air Force experience, and some of the operations that run out of the base.

The players’ first stop was a virtual reality flight simulator. For the Moose, it was an opportunity to get in a cockpit and spread their wings, so to speak. For actual pilots, the simulator is used with additional equipment to reproduce low oxygen conditions so pilots can learn to recognize the effects of deprivation. 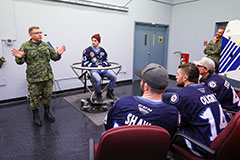 After their brief flights, the Moose players moved on to experience some of the inner-ear bending properties of the Barany chair. The chair is used to demonstrate spatial disorientation effects on pilots and show how you can’t necessarily trust what your body is telling you in the air. Players were spun in the chair with their eyes closed and asked to perform various tasks, like reading a word or raising their arms once the spinning stopped. The results were… mixed to say the least. With the fluid in their inner-ear still moving, Peter Stoykewych and Logan Shaw’s attempts to put their arms straight up went decidedly down and to the right. It took about 12 seconds for Skyler McKenzie’s vision to focus enough to be able to read a word about 15 feet in front of him. A blindfolded and ear-muffed Jimmy Oligny was tasked with tracking which way the chair was spinning. Without the direction of the chair’s spin changing, Oligny’s brain was eventually tricked into feeling the spinning had stopped, and then reversed directions. These exercises demonstrated just some of the difficult illusions pilots deal with in flight.

Once their heads stopped spinning, the Moose players moved on to learn about the 435 Transport and Rescue Squadron. This search and rescue squadron is ready to fly within 30 minutes of being notified. The squadron’s tasks can include airlift of freight and passengers, air-to-air refuelling and search and rescue missions in remote areas.

“We have very amazing mission-sets, and I think it’s very, very important for us to show the community what we do,” said 435 Squadron commanding officer Lieutenant-Colonel Johnny Coffin. “I think we do some really cool stuff. We protect the sovereignty of our country, and we are saving Canadians all over Canada.”

After Stoykewych finished scaling the climbing wall located in the squadron’s hangar, he looked back on the experiences of the day.

“It’s definitely eye opening to see what they do on a day-to-day basis,” commented the Moose captain. “We’re obviously very impressed and grateful for what they do. Just being able to experience it first-hand, and have them put us through some of the tests they go through was awesome.”

The players weren’t the only ones happy about how the afternoon went. 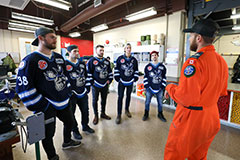 “It’s outstanding. We have a lot of hockey fans within the squadron,” explained Lieutenant-Colonel Coffin. “We had a huge group of 435 squadron members watching the guys climb the wall. It’s always great for us to pull the curtain aside and bring in the community, especially some big names like Manitoba Moose players.”

Spending time with the squadron members and base personnel, Stoykewych was impressed by the teamwork the group displays.

Wednesday’s visitors become the hosts on Monday, Nov. 11 as the Moose welcome members of the military to Bell MTS Place for the Remembrance Day game at 4 p.m. against the Texas Stars. The Moose will wear specialty jerseys that will be auctioned in support of  Soldier On. Tickets for the game are available at moosehockey.com/tickets.