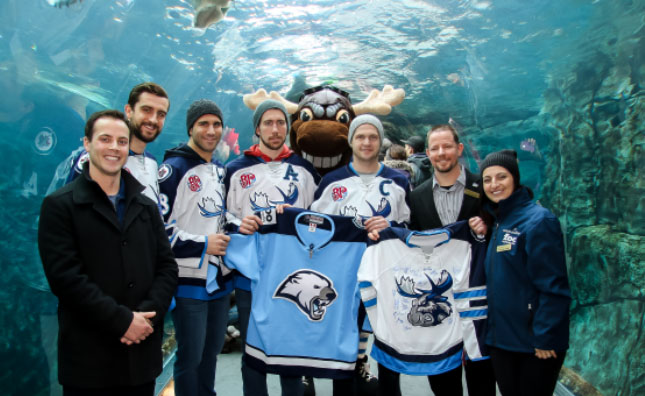 Who knew animals would play such a big part in things for the Manitoba Moose as the second longest home stand of the season came to a close?

A new and exciting partnership between the hockey club and the Assiniboine Park Zoo led to a Monday afternoon visit there by the team, a natural step for the Jets’ hopefuls after wearing polar bear jerseys for a home game early last month.

The experience faced-off with captain John Albert (and alternates Andrew MacWilliam and Patrice Cormier) taking part in a jersey presentation with zoo officials; a presentation that was turned into something made extra special by the presence of bears swimming in the facility above the spot where the gathering smiled for the cameras.

After that, Moose players signed autographs and played a part in a “Journey through Churchill Scavenger Hunt”.

The Scavenger Hunt gave the Moose a chance to meet fans and get to know young zoo goers while helping them chart their way to the end of the hunt.

Seeing the smiles on the faces of fans was a sight matched by those on the Moose players who enjoyed meet supporters, learning more about polar bears, and gaining an understanding of how the zoo serves the community.

And how about this?

Chase De Leo’s family has cared for animals of all sorts for years. The native of La Mirada, California says more than 20 animals can be found at the family home with his dad John and a hired-hand caring for them daily.

The speedy centre joked his parents may be trying to replace him because they’ve often added to the list since he moved away to pursue his hockey goals.

But there’s no joking around when it comes to his feelings about animals; he’s so into them that Monday’s visit wasn’t his first.

And, when asked about the partnership between the hockey club and the zoo he was quick to show his enthusiasm for the cause.

“I think it’s awesome…anytime you can raise awareness for any sort of animal, especially what we did with the polar bears and with the zoo, I think it’s super important to spread the word.”

And that’s just what De Leo and his mates did Monday; helped get the word out that there’s something very special going on at the Assiniboine Park Zoo.

No doubt that’s a message the Moose are happy to share – right up there with taking two points from the Wolves.

The Moose open an five-game road trip Wednesday morning in Rockford, IL and you can catch the action LIVE on moosehockey.com and TSN 1290 staring with the pre-game show at 10:15am.

View photos from the visit below: