My favourite games this season (part one) - Manitoba Moose

My favourite games this season (part one)

The Moose season ended less than two weeks ago which means, if you’re like me, you’ve been missing the team and its games for 10 days now.

With that in mind I’ve decided to put together an un-scientific list of my favourite games from the 2015-16 return of the American Hockey League to our province.

Oh, before I dive into “the list” hats off to Chase DeLeo, Patrice Cormier, and Jimmy Lodge on their three-goal games this season; each was different and special in its own way.

I’ll never forget Patrice saying his three goals from the door step in Rockford travelled less than 10 feet combined or the reaction from the bench as Jimmy completed a natural hat-trick (in the second last game of the season) for his first three AHL goals.

At the other end of the ice, kudos to goalies Connor Hellebuyck and Eric Comrie who combined for five shutouts with Hellebuyck notching four of them in just 30 AHL games.

You could even argue Connor and Eric played some of their best games in losing causes.

Hellebuyck’s 44 save 1-0 OT loss to Ontario back on Oct. 17 was a gem that produced a save or two that live on in the highlights of the season.

And, Comrie’s 49 stop masterpiece in Stockton on Jan. 22 came in the midst of his busiest stretch of the season and helped the team get through overtime tied 1-1 with the Heat, only to fall 2-1 in the shootout.

But enough with the pre-amble (albeit hard-earned), here is the start of my top five favs from year one of Moose 2.0. Check back in on Friday to see the next part of my list. 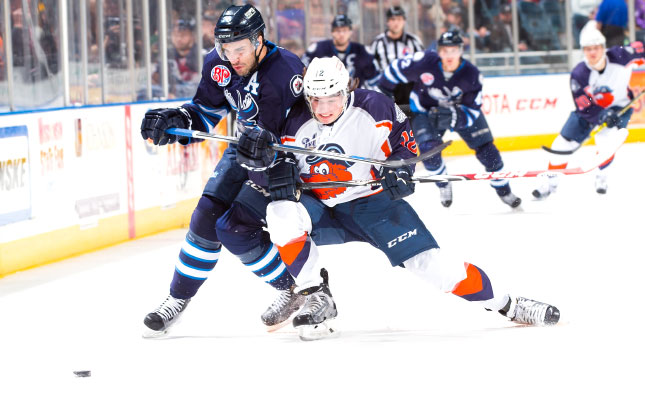 The Moose had their best run of the season in February; from the 10th through the 20th they did not lose in regulation.

It was an impressive six-game stretch (4-0-1-1) that reached its peak with a season-high fourth straight win on a stop in Milwaukee.

Three unanswered goals in the third period broke a 1-1 tie and gave the Moose a 4-1 win to extend a nice run; one that started with a home-ice win against long-time rivals Chicago and a sweep of the IceHogs in Rockford. 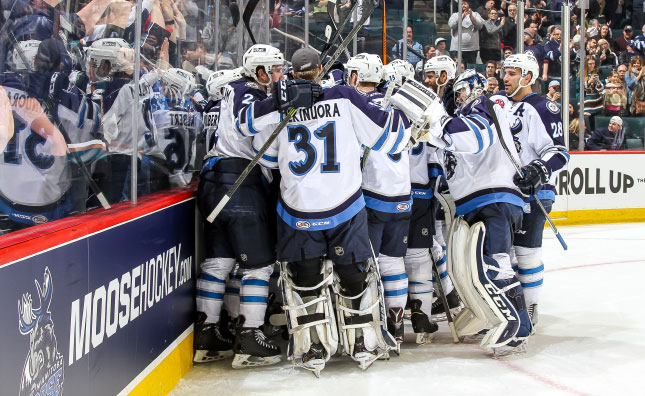 The Moose played the Toronto Marlies eight times this season; no easy task considering the Leafs’ affiliate was at the top of the overall standings from the very start.

Fast-forward to early-February and the last meeting of the campaign between the teams. It’s 30th overall hosting 1st overall at MTS Centre, and Manitoba has one point from seven previous games against Toronto.

So what happened? The Moose went down 3-1 early in the second period only to tie it before the frame was up on goals from Austen Brassard and John Albert.

Then, in the third period, Manitoba scored its second and third powerplay goals of the afternoon to go up 4-3 and then 5-4 only to have William Nylander tie it late.

No problem, Josh Morrissey and JC Lipon combined to set up Nic Petan for the winner in overtime with a shootout just seconds away!

Lipon wasn’t just in on the winner that day, he had an amazing five point game as the Moose took two from number-one.

Check back to the Moose Tracks Blog this Friday to see the second installment of my favourites from this past season.