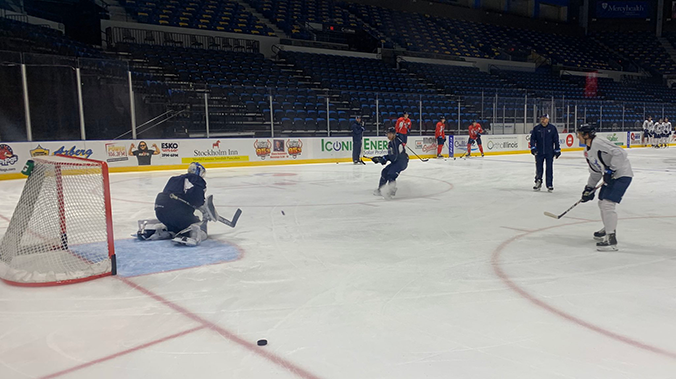 The Manitoba Moose held practice Monday morning at BMO Harris Bank Center as they look to close out their seven-game road trip on a winning note Tuesday night in Rockford.

The Moose have won three of six games during their longest road trip of the season to close a stellar November for the club. The team won 11 out of 15 games, including a 5-4-0-0 overall record on the road.

“I think so far we are having a good trip,” said Moose forward Emile Poirier. “Our last two games we came together and those were two big wins for us, but we have one more to go.”

Fellow forward Skyler Mckenzie has been playing on a line with Poirier and C.J. Suess for parts of this road trip, and the young forward has been pleased with the success their line has found.

“Our speed has been really good,” McKenzie said. “Those guys are workhorses so it’s pretty easy to play with them.”

Poirier has moved his way up and down the lineup a few times already this season, but he says he is able to adjust quickly no matter where he is playing.

“I think I’m used to it,” he said. “In hockey you have to adapt because there is a lot of changes in the American Hockey League – guys get called up or hurt, you have to be ready at any point. ”

Following Monday’s skate, the American Hockey League announced forward Jansen Harkins has been named the CCM/AHL Player of the Month for November. The 22-year-old led the AHL in scoring throughout the month of November, tallying 24 points (4G, 20A) in 15 games.

The Moose close out their seven-game road trip Tuesday night in Rockford against the IceHogs. The matchup will be broadcast on moosehockey.com/listenlive starting with the pre-game show at 6:45 p.m. CT. Puck drop will follow at 7 p.m.