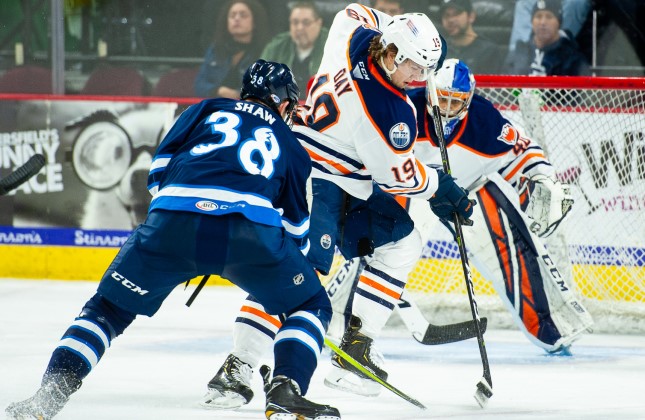 It’s on to the final stop today for the Manitoba Moose as this three-city tour of California nears a conclusion with two big games still to be played.

The Moose travel 3.5 hours by bus to Stockton in advance of games on consecutive nights against the Calgary Flames affiliate starting tomorrow.

For the first time this season the Moose take to the ice following three straight losses after dropping a 4-3 nail-biter in Bakersfield last night.

Trailing the Condors 4-1 late in the second period, Logan Shaw notched his second of the game to cut the gap to two goals.  He then struck for another in the third to complete the hat trick and move the Moose within a goal.

Despite a major push with Eric Comrie on the bench for an extra skater, Manitoba ran out of time leaving them losers of three straight after back-to-back losses to the Condors.

The three-goal game was Shaw’s second of the road trip.  He previously scored three power play goals in Manitoba’s impressive trip-opening win over the Gulls in San Diego on Wednesday.  Shaw now leads the Moose with 11 goals on the season.  He’s also tied with Mason Appleton on 18 points to lead the club.

“Look at the first two goals tonight (Wednesday).  They’re just going to the net and same as last game when I had the hat trick (Nov. 28) it was just going to the net, taking pucks to the net,” said Shaw after Wednesday’s game. “You know, the third one was definitely a lucky one tonight it was just a rolling puck. It was a knuckle puck, but you shoot the puck – good things are going to happen I think.”

Shaw praised the effort of the short-staffed Moose, who had sent four players to the Jets and have a half-dozen on the injured list, but lamented a sprinkling of little mistakes throughout last night’s game as what spoiled Manitoba’s push to get to two-and-two on the trip.

STOCKTON NOT ORDINARY STOP FOR POIRIER

Emile Poirier, and recent signing Austin Carroll, may be excused for being a little extra excited for the weekend games.  Both wingers were Calgary Flames draft picks who spent extended time with the Heat.

Poirier was a first round selection of Calgary in 2013 and played four seasons in the Flames organization, including eight games with the big club, but it’s Stockton that became a home-away-from-home of sorts.

“It’ll be fun I think,” said the hard-working forward in a conversation at the team hotel in Bakersfield. “I spent three years there, four years, in the Flames’ organization. Yeah, it’ll be fun. I’ll see some old faces and to play there, it’ll be kind of weird to be on the other side, but no I think it’ll be a good time.”

While Emile admits there’s some disappointment about not being able to reach his goals with the team that drafted him, he’s not living in the past.

“I spent a lot of time there and, yeah, my goal was to make the big club but it didn’t happen there and I think I just got better as a player too and I come here (Manitoba) and that’s my same goal coming here. And, I’m grateful for the time in Stockton – and with the Flames – and I’m just looking forward now.”

When it comes to looking forward, that means Friday night’s date with the Heat at the Stockton Arena.  Poirier makes it clear, the team has one objective regardless of how much roster flux the Moose are managing.

“We want to win every game. We have a lot of new guys come in, new guys out, a lot of movement but that’s the American League. I think we’ve got to get used to it because it’s like that all the time and so we did a good job so far, we’ve just got to come out with the win. I think that’s the main thing every game. We have to come out with the win and unfortunately we didn’t do it (in Bakersfield), but we’ve got two more games to do it in Stockton.”

Tune in to the action at moosehockey.com/listenlive and the Moose App or watch live with AHLTV.