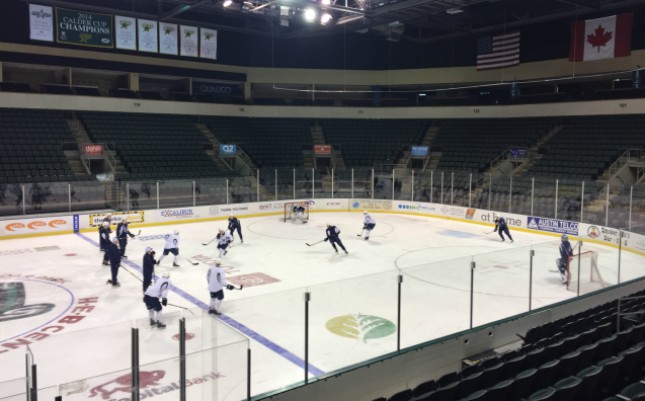 It’s not quite as stunning as a worst-to-first turnaround, but what the Manitoba Moose have going is pretty special just the same.

The Moose edged the Colorado Eagles 3-2 in overtime Saturday, sweeping a weekend set with the Colorado Avalanche affiliate.  The win also moved the Moose into the final playoff spot in the Central Division.

Not bad for a team that was at the bottom of the American Hockey League’s overall standings when it broke for Christmas.

A travel day Sunday took the Moose from Loveland, Colo. to Austin, Texas ahead of three games in the Lone Star State. That test starts Wednesday here against the Stars. Today the team split into two groups with one set of players taking part in an intense on-ice session and the others being put through the paces off-ice.

Let’s get back to the weekend. Tucker Poolman’s second goal of the game was the overtime winner Saturday in Colorado.  Post-game, the second-year pro pointed to a team gathering prior to starting the second half of the season as a turning point.

“We had a meeting when we got back (from holiday break) and coach just talked about one step at-a-time and just buying in to the system. And, at the end of the day, just showing up and working hard and being good teammates. So, from that point it’s just been about the basics. It’s just been about working hard and being good teammates and it’s just built from there. Step-by-step.”

Manitoba has won three straight, and is now 11 games over .500 since that refocusing at the end of December Poolman talked about. While the meeting was clearly significant, there are plenty of factors in the turnaround, including offense from the blue line – especially of late.

Defenceman have scored or assisted on seven of the last nine goals during the team’s current three-game win streak, and Poolman is leading the way.

The University of North Dakota grad credits playing up front on the way up for is ability to help out.

“Back in bantams and high school, and a little in college, I played some forward – and coaches had me play forward – so that mentality has kind of crept back into my game. So, in hindsight, it was kind of nice that I played that because I feel more comfortable trying to make plays out there.”

That background is clearly serving him well, Poolman has 17 points (3G, 14A) in his last 20 games.

Fellow defenceman Logan Stanley is on a three-game assist streak, and Cam Schilling has scored three times in the last six games.

Manitoba has improved its road game lately too with wins in four of its last five away outings heading into Wednesday game against the Stars here in Austin.

Tune in to coverage of Wednesday’s game on TSN 1290, moosehockey.com/listenlive, the Moose App or streamed live on AHLTV.