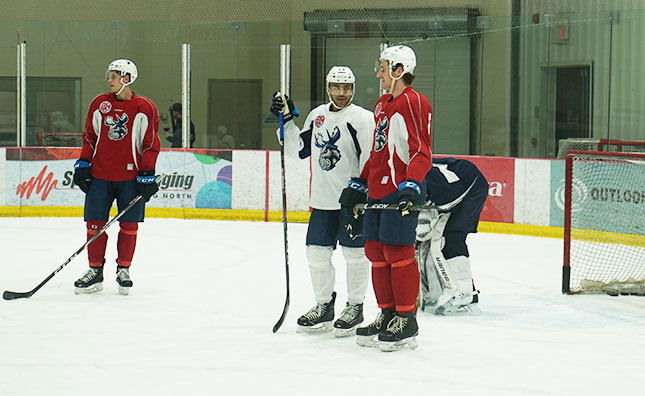 The Moose took to the ice for practice at Bell MTS Iceplex this morning. There was a new face joining the group for the first time as defenceman Daniel Brickley took part in his first practice with Manitoba. Brickley joined the Moose from the Ontario Reign, the AHL affiliate of the Los Angeles Kings. The other end of that swap sent Michael Spacek to the Reign. Despite changing teams at the AHL level, the transaction sees both Brickley (who has a year remaining on his contract) and Spacek remain members of Kings and Jets organizations respectively.

Brickley has been limited to just 11 games this season, while tallying two assists. He was sidelined for the opening months of this season due to an illness, but got back into the Reign lineup on Jan. 17. The Salt Lake City, Utah native recorded 12 points (2G, 10A) in 42 games with Ontario as a rookie and tallied one assist in four games with the Kings. The defender was a sought-after free agent coming out of college after a stellar career at Minnesota State (Mankato). Brickley posted 77 points (20G, 57A) in 107 career games and was named the WCHA’s defenceman of the year and to the conference’s first all-star team during the 2016-17 season.

“I’m really excited. Excited to get going with the guys and get rolling,” said Brickley following his first skate with the Moose. “I mean, I had an illness and got over that, but once I was ready to go (the season with Ontario) was good. The guys were doing pretty good down there.”

The 6’3, 205 lbs. defender describes himself as an offensive, puck-moving defenceman with a good shot.  Assistant coach Eric Dubois looks forward to adding the mobile defender to his group.

“I see good mobility for his size. He can move the puck as well,” commented Dubois. “We’ll get to know him a little bit more during the week, a couple more practices and a couple games this weekend, but I liked what I saw this morning for sure.”

By joining the Moose, Brickley is reunited with his former captain at Mankato in forward C.J. Suess. The pair played together for three seasons before they both turned pro.

“It’s nice, (Brickley) let me know as soon as he found out and let me know he was coming here,” said Suess. “It’s always nice to see a familiar face, and one I played with for three years. So it will be nice.”

The pair hadn’t seen each other since leaving college.

“It’s good to see (Suess). He, like usual, was smiling with no teeth and I’m excited to play with him,” said Brickley. “He was a good leader (in college). He was older than me and someone to look up to and he’s a good hockey player. He worked hard and he’s here now. Fortunately I get to play with him.”

With the Moose adding Brickley on the back end, the team reassigned defenceman Charles-David Beaudoin to the ECHL’s Rapid City Rush earlier today.

Brickley’s first chance to get into game action with the Moose will be this weekend when the team takes on the Iowa Wild on Saturday (6 p.m.) and Sunday (2 p.m.). Saturday is Gender Equality Night as well as an Upper Deck hockey card giveaway for the first 3,000 fans in attendance. Sunday’s game features a Logan Stanley Bobblehead giveaway for the first 3,000 fans at Bell MTS Place.

Tickets are available at moosehockey.com/tickets or through the Moose Mobile App.