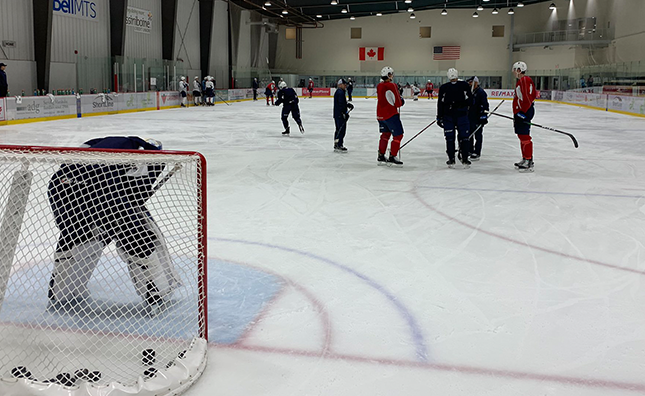 The Manitoba Moose were back at practice on Thanksgiving Monday after dropping two games to the Toronto Marlies at Bell MTS Place.

“We know what we did wrong,” said forward JC Lipon. “You can’t change your game with who you are playing against. You got to work hard and we just didn’t win enough battles on the weekend. That’s probably what we’re gonna work on all this week.”

Head Coach Pascal Vincent echoed Lipon’s feelings that the club was not good enough in one-on-on battles against the Marlies.

“The one-on-ones, losing your man and losing your net front battles, that I have a big issue with,” Vincent said. “We know we have great people on the team, we know they mean well and they want to work hard, but it has to be consistent. Playing at the pro level is a tough job.”

Defencemen Sami Niku and Peter Stoykewych both missed practice Monday as they are dealing with injuries. Forward Logan Shaw was also held off the ice as a precaution.

The Manitoba Moose play the Iowa Wild in a pair of games on Friday and Saturday. The Halloween Game will be played on October 19th. Fans are encouraged to dress up in costumes and arrive early for pre-game festivities. Puck drop is scheduled for 6 p.m. CT. Tickets are available at moosehockey.com/tickets.