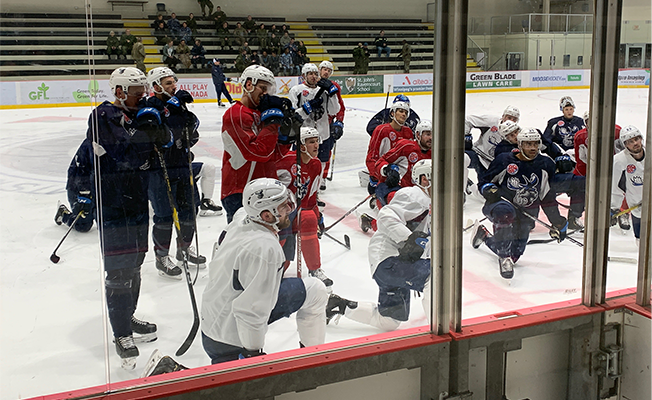 After losses to Iowa on Friday and Saturday, it was back to practice for the Manitoba Moose as they gear up for road matchups against Grand Rapids and Chicago this upcoming weekend.

“You just want to stop the bleeding while you can,” said forward Seth Griffith. “It’s still early in the year, we still got lots of time, but as each game passes it’s valuable points that are slipping away.”

The Moose have lost four straight games, with the Moose trailing by just one goal into the final minute of three of the four defeats. The team is putting the losses behind them and looking forward.

“We’ll probably just forget about these four and try to not have not so much pressure on trying to find a win,” said forward Ryan White. “Usually when we build momentum throughout the night and do the right things consistently we’ll find ways to win.”

There were some special guests at Bell MTS Iceplex today as a group from CFB Winnipeg stopped by to take in the team’s skate.

The Moose are back at home on Saturday, Nov. 2 at 2 p.m. They take on the Grand Rapids Griffins in the team’s Hockey Fights Cancer game. Tickets are available at moosehockey.com/tickets