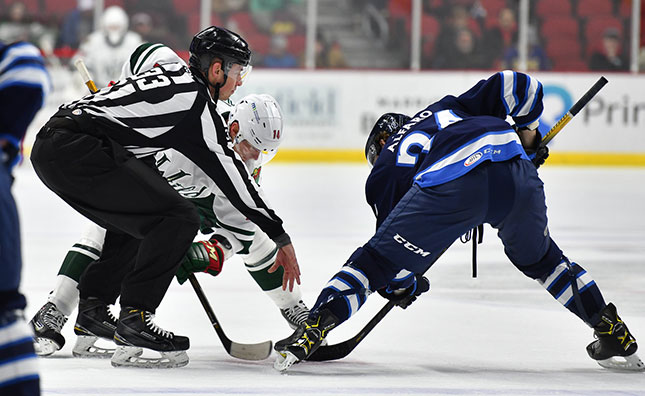 In today’s climate, the roster of an American Hockey League team remains in a constant state of flux. Between COVID-19 protocols, injuries and the reinstated NHL Taxi Squad, AHL teams are forced to be extremely flexible in order to ensure their roster remains competitive on a nightly basis. Few, if any, teams are navigating the situation better than the Manitoba Moose.

The Moose roster has gone through numerous changes, seeing different iterations of the team hit the ice almost every game in 2022. Despite constant adversity and a rotating cast of characters, this Moose squad pulled together in order to create some lasting impressions and success. 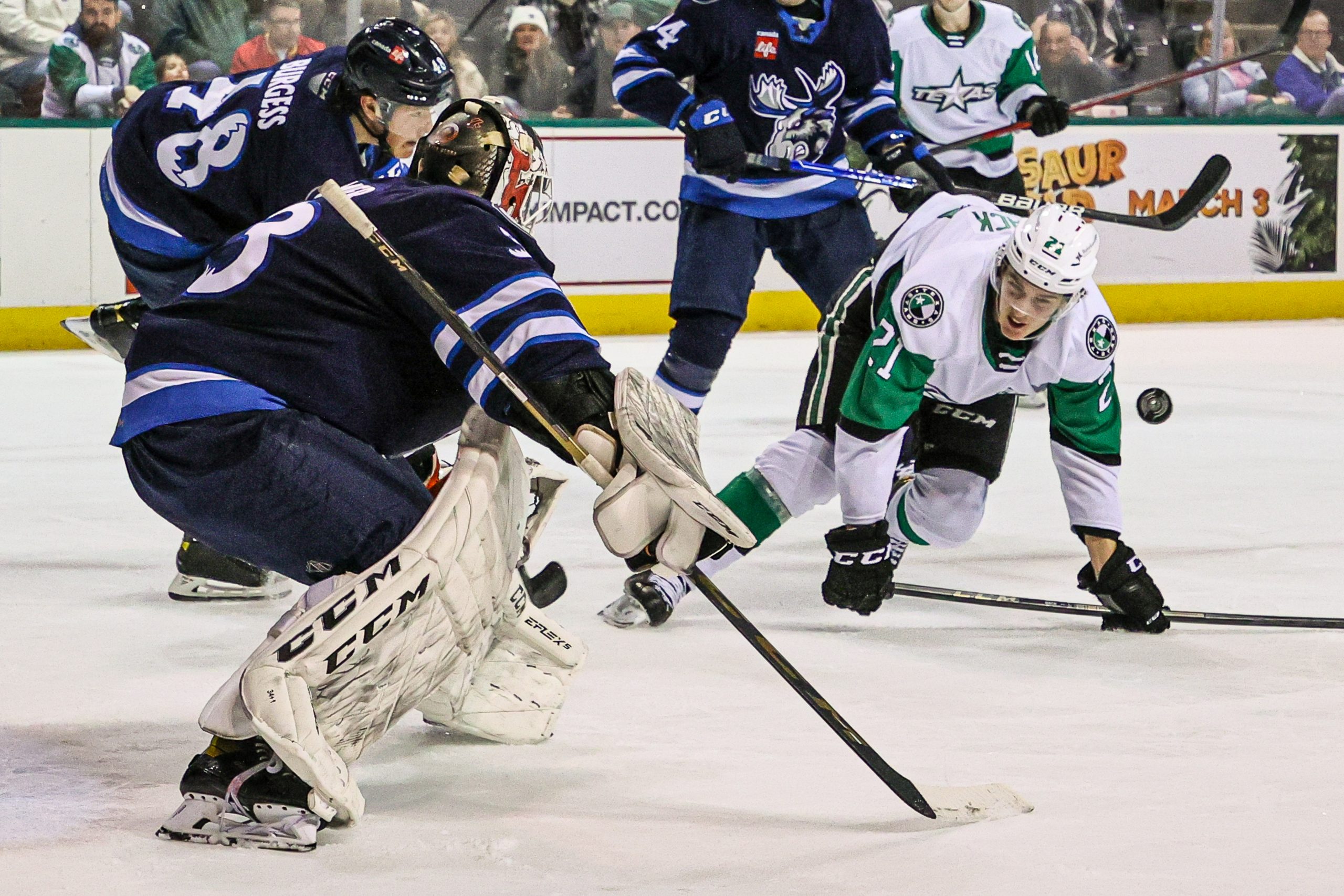 Goaltender Evan Cormier was signed to a professional tryout on Jan. 1. The netminder was in the midst of a great season with the ECHL’s Newfoundland Growlers, but hadn’t seen action in the AHL this season. Cormier was quickly called upon with Mikhail Berdin unavailable due to COVID-19 protocols, Arvid Holm on the Taxi Squad and Philippe Desrosiers injured.

The Bowmanville, Ont. product not only met expectations, he shattered them by making 28 saves and capturing the victory in his Moose debut. Since that game the goaltender went on to post a record of 3-1-2 with a 2.44 goals-against average and .918 save percentage. He’s a large reason the Moose have been red-hot to start the new year.

After a a win and a shootout loss against Iowa, the Moose hit the road for a two-week trip. The swing started on Jan. 7 with a matchup against the Texas Stars.  In Texas the Moose were without numerous players due to COVID-19 protocols. It didn’t slow Manitoba down as Austin Poganski scored twice and Cormier made 34 saves in a 4-1 win. The following night was a thrilling affair that saw the Isaac Johnson net his first career AHL goal. Stars forward Anthony Louis then tied the game 4-4 with a minute left on a hat-trick goal. That all set the stage for Haralds Egle to score with less than a second on the clock to win the game in regulation.

The Winnipeg Jets needed some assistance and came calling to the Moose for reinforcements. Defencemen Ville Heinola and Dylan Samberg made the trip to the big club with another defenceman, Declan Chisholm, joining the duo days later. 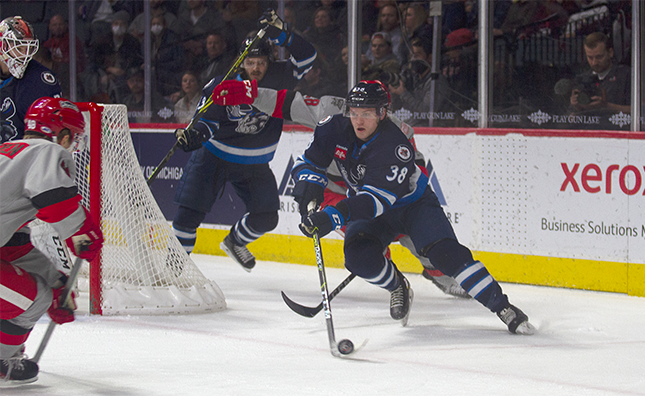 The roster moves forced the Moose to dig further into their depth and recall Dean Stewart from the Wichita Thunder, Trent Bourque and Tristan Pomerleau from the Growlers and Hayden Shaw from the Trois-Rivieres Lions. Some of these players, like Stewart or Pomerleau, had under five games of AHL experience combined at the time of their recall.

Yet they were welcomed into the room and meshed immediately with the current group. Further recalls and COVID-19 cases required the Moose to be even more creative. The resulting moves netted defenceman Chris Martenet and forward Matt Alfaro on professional tryouts from the ECHL’s Toledo Walleye and Wheeling Nailers respectively. With limited practice under their belts, these latest additions were pressed into duty as the Moose continued six-game road swing with stops yet to come in Milwaukee, Grand Rapids and Iowa.

With all the movement and uncertainty, you could be forgiven if you thought the Moose would suffer. What transpired was a rebuilt group of players bonding together and finding ways to win.

“The boys that came up with us, they’re playing great,” said Moose captain Jimmy Oligny. “We didn’t know what to expect with all these guys. They came up and have done the job. It’s great to see that we’re still getting points even though we’re short-staffed. All the credit to these guys who came in short notice like that and are playing great for us.”

All-told, Manitoba was without 15 players who had previously been on the roster when the Moose made their way to Milwaukee. There, Mikhail Berdin, who hadn’t played a single game since Dec. 16, rejoined the club to command the net with effortless poise and record a 24-save shutout. Luke Johnson, who missed 22 games due to injury, scored the only tally on a goaltender that night in his third game back in the lineup. Poganski chimed in again to add insurance into an empty net.

“I think they’re all hungry,” stated Moose Head Coach Mark Morrison of the players joining into the Moose lineup. “These guys are all players that had good careers so far. Greg Meireles is one, Todd Burgess is another. They’re dying for the opportunity to prove themselves as regular American Hockey League players up the lineup. I think they’re doing that, and they realize that this is an opportunity for them, and they’ve taken the ball and run with it. They’ve done a great job and they seem to get better every game. “

Poganski, who claimed the Moose scoring lead on the trip, joined the parade of players to the NHL. Traveling with him were Arvid Holm and Jeff Malott. All the recent recalls served to pave the way for some exciting debuts. 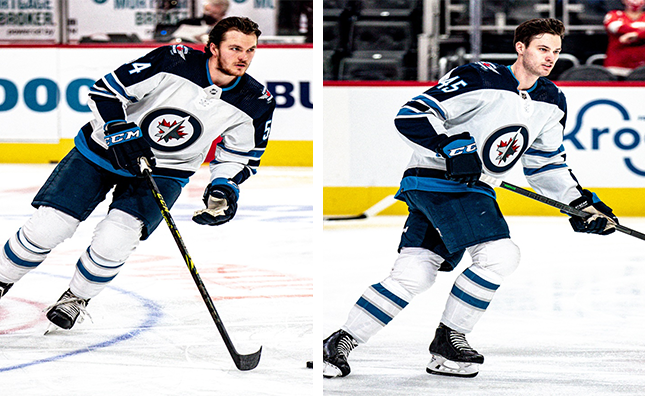 It gave Samberg and Chisholm, who were having wonderful seasons with the Moose, the chance to make to NHL debuts. Their first taste of NHL action came against the Detroit Red Wings at Little Caesars Arena on Jan. 13. Chisholm played 13:44 in the contest and recorded four shots. Samberg finished the night with an assist, his first NHL point, in 17:52 of ice time.

The defenceman also played a pivotal part on the penalty kill and spent nearly four minutes defending against the Red Wings power play units. Poganski, who had six previous games of NHL experience under his belt, made his Jets debut that night as well and helped the NHL club to a 3-0 shutout win.

While players were still exiting the lineup, the Moose started to get some familiar faces back in the fold. In Grand Rapids on Jan. 14, Evan Polei scored a huge goal and Thomas Caron set the tone with his biggest hit of the season as both players made their return from the Covid list. The Moose took a point in a 3-2 overtime loss. The team rebounded with a 2-1 shootout win the following night to get right back in the win column. Luke Johnson, who had five points in the first five games of the road trip, netted the shootout-winning tally.

“I think this whole road trip has been really good for us,” said Moose defenceman Leon Gawanke, who missed the first three games of the road swing. “Obviously I wasn’t there for most of it but I watched every game and saw that the guys were just battling. Those games in Texas were some hard games and Milwaukee too. I think it’s just what we’ve been doing all year. We keep it kind of simple. We stuck to our plan, and it doesn’t matter who is in the lineup. Whoever gets in that’s what he has to do, that’s his job and it makes us successful right now.”

The Moose finished the trip in Iowa without key forwards in the lineup as Poganski once again returned to the Winnipeg Jets, this time alongside Mikey Eyssimont. Meanwhile, Jeff Malott was placed in COVID-19 protocol. The good news for Manitoba was the return of Cole Maier, Johnathan Kovacevic, Declan Chisholm and Isaac Johnson to the rotation. It was a hard-fought game that saw Matt Alfaro record his first AHL goal and Haralds Egle register three points in a narrow 4-3 loss.

Despite everything the team went through on the two-week trip, the Moose finished the road swing with an impressive 4-1-1-0 record. That mark allowed Manitoba to solidify its hold on second place in the Central Division ahead of a six-game home stand.

Adversity breeds opportunity and this Moose team has fully adopted the next man up mentality instilled in them by the coaching staff. With all the potential obstacles presented this season, the Moose ability to adapt, overcome and thrive has been put to the test like never before. Teams love a challenge and the best is yet to come for the boys in antlers.

The Moose take on the division-leading Chicago Wolves on Saturday and Sunday in a pair of 2 p.m. matinee games at Canada Life Centre. Limited tickets are available at MooseHockey.com. Coverage on CJOB.com/sports, AHLTV and the Manitoba Moose App begins at 1:45 p.m. CT.