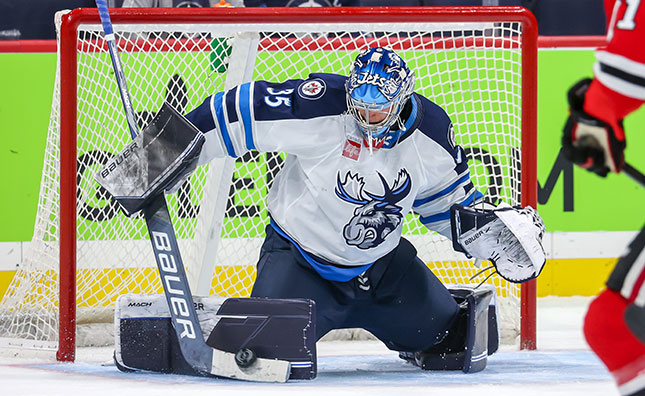 Fans in Winnipeg could be excused for not knowing the name Oskari Salminen when the Winnipeg Jets announced a two-year, entry-level contract for the netminder on May 6, 2022. While Salminen was a relative unknown in North America, the 23-year old netminder was one of the elites in his home country.

Salminen was a workhorse for Jukurit during the 2021-22 campaign. He led Liiga with 55 games played and posted a league-high 29 wins. Salminen also factored into the top-six in goals-against average (2.07) and save percentage (.928). The Kotka, Finland product also led the circuit with nine shutouts, meaning the netminder was recording a clean sheet on average once every six games.

October 16 saw Salminen step between the pipes for his first regular season game in North America. It was quite the first impression. Salminen turned aside all 32 shots fired his way by the Rockford IceHogs for his first AHL win and shutout. Following his first win, Salminen discussed the adjustments he had to make leading into the season.

“I struggled a bit in the rookie tournament and stuff,” said Salminen. “I felt like everything was so quick. Now that I’ve been here a month it feels better. As you can see, it went quite well. I’m feeling at home in the rink now.”

The undrafted goaltender showed his ability to bounce back following his first loss of the season on Oct. 29. Since then, in two appearances, Salminen stopped 49 of 51 shots in five periods of action against the Texas Stars. That included turning aside 32 of 33 attempts from the Stars on Nov. 6 on the way to a 2-1 overtime win. 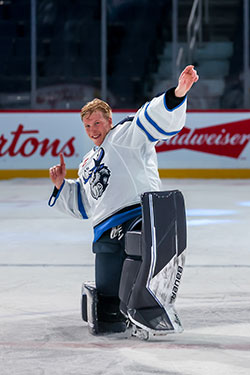 “I played good. I was definitely ready for the game,” Salminen told reporters following the win. “The last start I had wasn’t really that good in my opinion. I wasn’t really ready. So I pumped myself up for today and felt good.”

Salminen’s play has certainly been noticed by the team’s skaters.

“We just need to be a little better in front of him. We can’t rely on (Salminen) to make those big saves every night, but if he’s going to do it, we welcome it,” chuckled forward Evan Polei. “He’s been super solid. He’s made a lot of big saves and that’s good for his game and his confidence. It looks great on our organization and he’s going to be for us.”

After a strong first six appearances, we’ll see if Salminen is able to maintain his level over the balance of the long AHL campaign. If he is able to hold onto his early pace, the Moose will once again be able to lean on a pair of steady options in the crease with Oskari Salminen and Arvid Holm ready to backstop the team.

The Moose are in action this weekend for a pair of matchups against the Calgary Wranglers. Friday’s contest (6 p.m.) is the Soccer Game, featuring a scarf giveaway for the first 3,000 fans in attendance. Sunday’s game (12 p.m.) puts the focus on an important cause with Hockey Fights Cancer as the Moose wear their first specialty jersey of the season. Tickets for both games are available at MooseHockey.com/TICKETS.