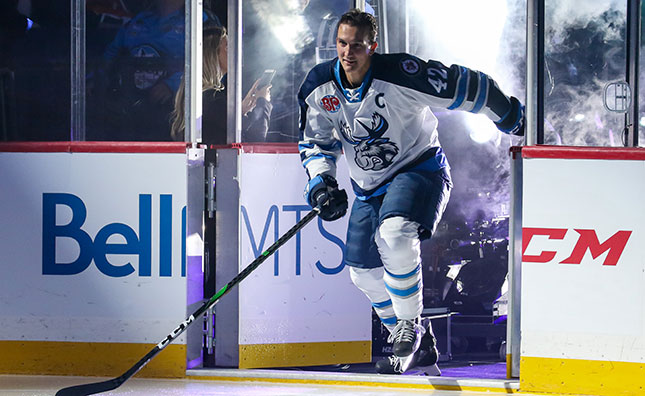 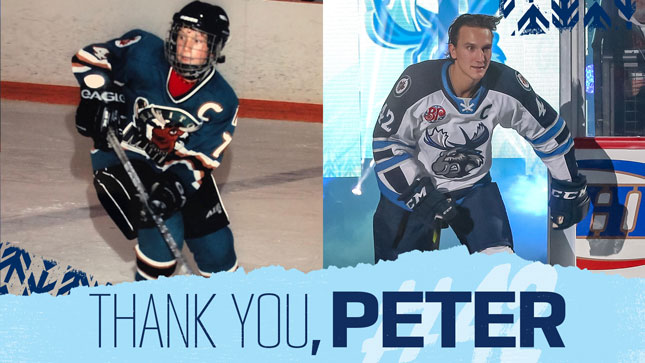 Moose captain Peter Stoykewych announced his retirement from professional hockey today. The image above is the closing slate from the ‘thank you’ video the Moose posted. I’m not sure there’s a better way to symbolize what Stoykewych meant to this organization. A generation of hockey fans grew up in Winnipeg with the Manitoba Moose as the big name in local hockey. For a player who wore Moose colours in minor hockey to eventually rise to become captain of the professional team… you couldn’t ask for a better story.

The series of events leading Stoykewych to wearing antlers is an exceptional set of coincidences. The Winnipeg Blues defender was drafted 199th overall in 2010 by the Atlanta Thrashers. He was the last selection the Thrashers would make based in Atlanta. The next draft pick the organization made was Mark 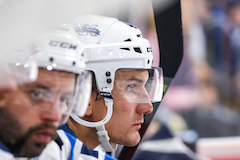 Scheifele while at the same time revealing the newly-relocated franchise would indeed be named the Winnipeg Jets. Of course, this meant the Moose were bound for St. John’s to become the IceCaps. Stoykewych went on to play in the USHL before suiting up for the Colorado College Tigers for four seasons. After his NCAA eligibility was exhausted, the Winnipegger started his professional career playing six games for the IceCaps.

With the IceCaps relocating back to Winnipeg, Stoykewych was set to play his rookie professional season in his hometown.

“I just feel so fortunate to be able to (play in Winnipeg),” Stoykewych told reporters following the announcement. “So many professionals play for such a long time and never get to play in front of family and friends. I was always blessed and tried to appreciate it and never take it for granted that my friends could come after they were done work, my parents could come every single day. Being from Winnipeg and appreciating and knowing what the Moose, True North and the Winnipeg Jets mean to the community, I grew up in it and they meant a lot to me growing up as well. So to be a part of that in general was awesome… I’ll always cherish that.”

Stoykewych went on to appear in 267 games with the franchise, 10th all-time among defencemen. He tallied 72 points (19G, 53A) to finish his career 11th 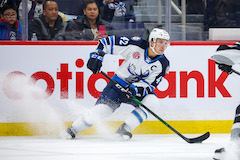 among defenders on the franchise list. His impact on the team led to the defender being one of the 12 on a shortlist for the Moose 20th Season All-Time Team, the final group of which will be revealed Thursday evening.

Leading into the 2018-19 season, Stoykewych’s rise from minor hockey captain to professional hockey captain was complete. The third-year pro was named captain of the Moose, becoming the second Winnipeg-born player to wear the ‘C’ for Manitoba.

“I never thought I would be in a position to become captain of the Moose. It was never lost on me how important that was to me and the organization, and how proud I was to represent the team, players and people of the organization through that.”

Just as important as his play on the ice, Stoykewych’s impact away from the rink truly cements his legacy with the club. Stoykewych was named the EPRA – Julian Klymkiw Community Service Award winner for his contributions to the community at the end of his first season as the team’s captain. Being able to spend time with fans and doing his part to enrich the community was always something top of mind through Stoykewych’s career. 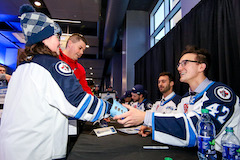 “To have that platform, to be able to do good in the community and to give back, and have people come to the rink after a hard day of work and come to enjoy themselves and watch you play, it’s tough to give that up.”

Unfortunately for Stoykewych and the Moose, their captain was limited to just 12 games due to injury this past season. It was during that time the 27-year-old worked through the decision to step away from playing.

“I took some time to reflect and be re-evaluated, talked to some doctors I’ve trusted for the past five years here. We discussed things, just about life in general, and decided it was time to move on from hockey. I just played a handful of games this season, so I’ve had time to reflect. It’s not an easy decision and the things you’re going to miss most are the things that never happen on the ice. It’s all the stuff in the room and all the people you meet along the way.”

At the end of his hockey career, if Stoykewych had one message for the kid on the other side of that image, it would be to enjoy the ride.

“I’d tell that kid that it happens really fast and appreciate it as you go. Because eventually one day… it ends.”

Congratulations to you, Stoyk, on a great career. We all can’t wait to see what is next for you.