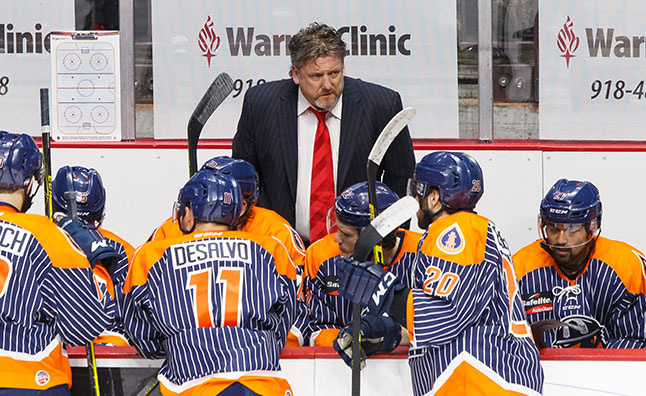 No matter how you consume your Jets’ action – television, radio, online, social media – you know the club is genuinely “fueled by passion.”

You can say the same thing about a man who plays an important part in developing some of the organization’s young players – Tulsa Oilers’ head coach Jason Christie.

“I love the game. I really, truly do. I learn something new every day,” said Christie during a recent telephone conversation from his home in Oklahoma. “I love going to the rink. I love the competition. As a player I didn’t have all the skill in the world – I had to work for everything I got. It just was in me to keep trucking along in the game of hockey.”

Truck along is what Christie does.  After a decade as a pro player, he’s gearing up for his 14th season as an ECHL head coach.

Before getting into management, Jason spent a decade contributing offence, and a little blood, sweat, and tears for teams in the ECHL, IHL, AHL, and UK.  He capped it with a playoff MVP performance with Peoria of the ECHL in 2000.

Now, nearly a decade-and-a-half into his time as a bench boss, he’s the winningest coach in ECHL history.

Last season his Tulsa team’s efforts pushed him passed Winnipegger John Marks for top spot on the ECHL coaching wins list.  By the time the campaign was over, Christie had 520 victories – 29 “W’s” clear of second place and counting.

Impressive, but far from an individual achievement says Christie.

“That goes back to having the players on those tough days to be able to grind through it – to understand how important winning is, not only for themselves, but for their teammates. I’ve been fortunate to have a lot of good hockey players, and good people, around that did work hard for me.”

The coach is also quick to credit his wife Kelley for backing him while spreading the kudos to his two boys JB and Jaxon too.

“The kids are happy in school.  They’re a big part of this – they love the game. The support they give me is tremendous and I wouldn’t be able to do this if it wasn’t for them.”

PARTNERING WITH THE JETS TO SHAPE PROSPECTS

With an extensive playing background, and his now vast coaching experience, it’s easy to see how Christie appealed to the Jets’ as a resource for grooming young players.

The two sides first linked up when Jason guided the Ontario Reign (ECHL) back in 2013.  The relationship carried on when the product of Gibbons, AB moved to Tulsa prior to last season.

In 2015-16 alone, Jason lent his expertise to seven Jets’/Moose hopefuls (Walker, Blomqvist, Lodge, Harstad, Serville, Fronk, and Olkinuora), not to mention centre Dan De Salvo who joined the Moose from Tulsa on a PTO and notched 14 points in 17 AHL games.

“Each and every year is important for these kids – some kids have to take a different road to go where they want to go and we’re able to support them and help them on the way,” said the former IHL Moose forward who worked alongside current Jets’ General Manager Kevin Cheveldayoff when both were with the Chicago Wolves.

When it comes to mentoring up-and-comers, Christie believes he understands the journey they’re on and can be that person to make a difference in their lives.

“For me it’s just trying to build them up, develop them in areas where they need to get better at – every player is different. Being able to coach in the American Hockey League, and play there and see that, I think I hold some advice for them.”

So who are the players he sees as his most memorable students?

Christie is careful not to single players out, but he didn’t mind saying Jets’ goalie Michael Hutchinson played for him in Ontario a few years back.  The goalie set an impressive standard for the entire team with his work ethic.

It’s too early to know who the Jets/Moose will send to Tulsa this season.  With Jason Christie to teach them what it takes to be a professional, odds are those prospects will end up much better for the experience.

The Moose visit Fargo and Grand Forks, ND on October 8 and 9, respectively, for pre-season games against the Iowa Wild – visit moosehockey.com for ticket information.