The Manitoba Moose Hockey Club announced its 2020-21 player award winners this evening during the 2020-21 Manitoba Moose Player Awards Show. A replay of the event is available above. 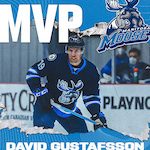 Gustafsson, 21, recorded 19 points in 22 games during his second season with the Moose. That mark ranked him second on the club in points per game. Gustafsson recorded points in 13 of the 22 games he played, and only went consecutive games without a point once this past season. The Tingsryd, Swe. product offered clutch offence for the club, leading the team with three game-winning goals and adding a shootout winner. Gustafsson’s shooting percentage of 16.3 was second on the club. The Winnipeg Jets 2018 second round selection (60th overall) also recorded all of his seven goals, and 14 of his 19 points, at even strength.
2019-20 Winner: Jansen Harkins 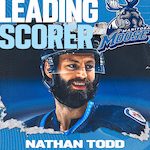 Todd, 25, led the Moose and the entire Canadian Division with 32 points in 36 games. The Ottawa, Ont. product’s 12 goals were fourth in the division and his 20 assists were second. Todd paced the Moose with 20 points (7G, 13A) at even strength and ranked second on the club with 12 power play points (5G, 7A). The winger tied for the Moose lead with a plus-10 rating, which also ranked fifth in the division. Todd recorded six multi-point games this season, including five three-point outings. In recognition of his excellent season, Todd was named to the AHL’s Canadian Division All-Star Team.
2019-20 Winner: Seth Griffith 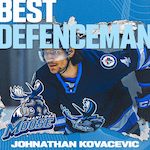 Kovacevic, 23, took on an important leadership role on the Moose blue line in just his second season of professional hockey. The Grimsby, Ont. product grew into a dominant force for Manitoba, racking up 11 points (2G, 9A) in his final 10 games of the season. The former third round pick of the Winnipeg Jets also posted a staggering plus-14 rating through those contests. Kovacevic led Moose defenders with 14 points in 29 games and tied for the team lead with a plus-10 rating.
2019-20 Winner: Cameron Schilling 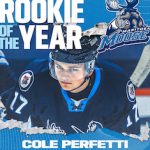 Perfetti, 19, finished second on the Moose with 26 points comprised of nine goals and 17 assists. The Whitby, Ont. product was named the CCM-AHL Rookie of the Month in April when he posted 13 points (4G, 9A) in nine games. The Winnipeg Jets 10th overall pick in 2020 led Manitoba with 13 points (4G, 9A) recorded on the power play. Perfetti finished the season by winning a gold medal with Team Canada at the IIHF World Hockey Championship in Riga, Latvia.
2019-20 Winner: Mikhail Berdin 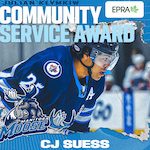 Suess, 27, was instrumental in founding SWYFT. Short for ‘Say What You Feel, Speak What You Think’, SWYFT is a charitable organization focusing on mental health awareness. Through SWYFT, Suess is committed to de-stigmatizing mental health issues and providing resources for those struggling with their mental health. Fundraising efforts for the charity helps fund Behavioural Health programming at the University of Minnesota Masonic Children’s Hospital. For more information on SWYFT, visit swyftco.org.
2019-20 Winner: Jimmy Oligny 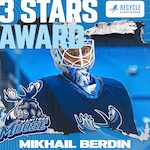 Berdin, 23, was named a star of the game on seven occasions this season. This included five times when the Moose netminder garnered first star honours. The Ufa, Rus. native posted a streak of four consecutive first star nods from February 18 to 24. Berdin appeared in 30 of Manitoba’s 36 games this season, posting a 13-11-4 record to go with a 2.89 goals-against average and an .897 save percentage. Berdin ranked third in the AHL with 730 saves this season.
2019-20 Winner: Seth Griffith