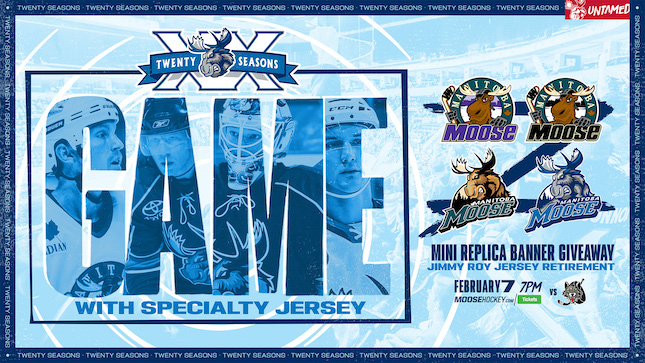 The Manitoba Moose Hockey Club highlights its 20th Season celebrations on Friday, Feb. 7 with the team’s 20th Season Game. The Moose host their long-time rivals, the Chicago Wolves in a 7 p.m. matchup. Fans are encouraged to arrive early so as not to miss any of the pre-game celebrations.

The Moose lead off Friday’s game by retiring Jimmy Roy’s number 21 prior to puck drop. Roy played nine seasons for the Moose. He is the franchise leader in games played (603) and penalty minutes (1,434), while ranking second in goals (101), shots on goal (1,096), game-winning goals (17) and shorthanded goals (10). Roy is the second player to see his jersey retired by the Moose, following former captain Mike Keane.

Moose players will wear a special edition jersey honouring the evolving look of the team during its 20 seasons in Manitoba. The jerseys will be auctioned off on the concourse during the game and online through NHL auctions in the days following. Funds raised will support Hockey Manitoba.

Fans can commemorate the event by taking home their own Jimmy Roy replica mini banner. The giveaway item is available to the first 3,000 fans through the doors at Bell MTS Place.

The evening’s presentation will feature Moose alumni from all over the hockey world sharing memories of their time with the franchise.

Tickets for the Moose 20th Season Game on Friday, Feb. 7 are available at moosehockey.com/tickets or through the Moose Mobile App.