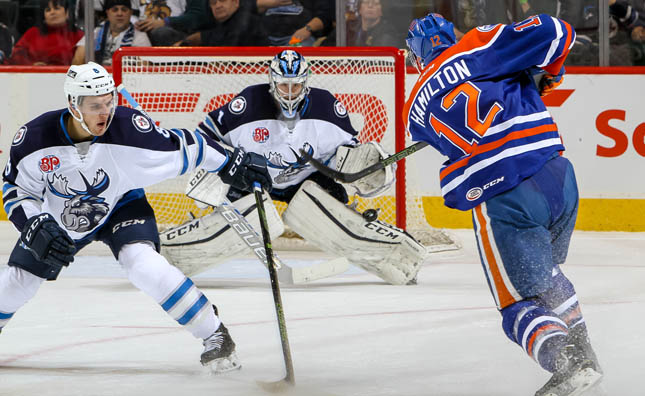 The Manitoba Moose will face the Bakersfield Condors in the two team’s first meeting in California. This is the third of four meetings between these two teams this season with the season series tied at 1-1-0-0. They will play the final game of their season series this coming Friday, Jan. 29 in Bakersfield.

Both previous games between these two teams were tightly contested battles that took place at the MTS Centre in Winnipeg. In game one it was Alexis Loiseau who scored the game winner midway through the third period to give the Condors a 2-1 victory back on Nov. 20. Mitch Moroz had the other goal for the Condors while Brenden Kichton had the lone goal for the Moose. Laurent Brossoit had the win in the Condors net with 32 saves while Connor Hellebuyck (now with the NHL’s Winnipeg Jets) made 28 in net for the Moose. In the rematch on Nov. 22, it was Moose goaltender Eric Comrie who was the star, making 32 saves in a 3-1 victory. Scott Kosmachuk had a goal and an assist for the Moose with the other goals coming from JC Lipon and Austen Brassard. Anton Slepyshev scored the lone goal for the Condors while Laurent Brossoit took the loss while making 25 saves.

Three players sit on top of the point leaders in the season series so far for these two teams, all from the Manitoba Moose. Austen Brassard, Brenden Kichton and Scott Kosmachuk have each scored a goal and an assist so far through the two games. Another four players (still currently on the Moose roster) have recorded a point in JC Lipon, Chase De Leo, Julian Melchiori and Nic Petan. On the Condors just four of the six players who have recorded a point remain on the roster (Mitch Moroz, Anton Slepyshev, Brad Hunt and Jujhar Khaira).

The Moose have benefitted from some incredible goaltending as of late (and all season). Goaltender Eric Comrie continues to put together an incredible rookie season in the Moose net. The native of Edmonton, Alberta, who now resides in California, had a big homecoming to his home state this past week. He matched a league high with 49 saves in his game against Stockton this past Friday night. Comrie currently leads the AHL with 845 saves. Not to be outdone, backup goaltender Jussi Olkinuora was outstanding in Manitoba’s last game against Stockton on Saturday making a career high 44 saves in the 3-2 overtime loss. Previous to Saturday’s game, Comrie had made 18 consecutive starts in the Moose net. It was announced Tuesday that Comrie will replace Connor Hellebuyck as representing the Moose at the 2016 AHL All-Star Classic.

JC Lipon has been one of the most consistent players for the Moose this season bringing a physical game along with an increasingly impressive scoring touch. So far this season with Manitoba, Lipon is third on the team in points and has scored eight goals, nine assists for 17 points in 30 games while also being second on the team with 45 penalty minutes. The Regina, Saskatchewan native played two games for the Winnipeg Jets, including his NHL debut on Jan. 18 vs. Colorado, during his stint in the NHL after being called up on Jan. 17. He was re-assigned to the Moose on Jan. 23 and will play his first game back in the Manitoba lineup tonight.