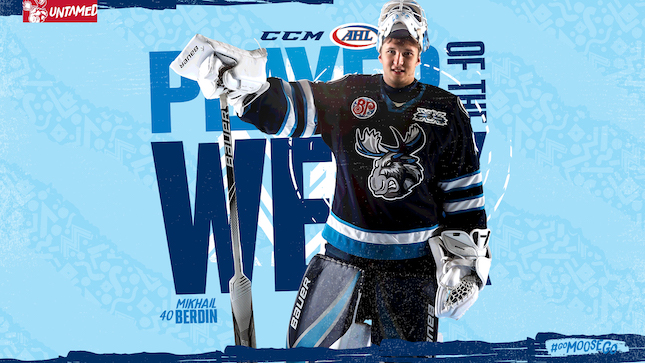 Berdin started out by making 32 saves on 33 shots as the Moose earned a 4-1 win over the Texas Stars on Monday. He followed that performance by turning aside 36 of 37 Texas offerings, including 12 in a scoreless third period, as the Moose held on for a 2-1 win in Wednesday’s rematch. The Ufa, Russia native then turned his attention to stymying the San Antonio Rampage. On Friday, Berdin made a career-high 45 saves, including 20 in the first period, to backstop Manitoba to a 2-1 overtime victory. The Moose goaltender wrapped up the week with a 35-save win on Sunday as the club picked up a 5-2 victory against San Antonio. Berdin recorded his first AHL assist in the win.

Berdin, a sixth round pick of the Winnipeg Jets in 2016, hasn’t allowed more than two goals in his past six games. He has stopped 215 of 220 shots during a six-game winning streak. Berdin started 15 of Manitoba’s first 17 games this season while posting a 9-6-0 record with a 2.46 goals-against average, a .927 save percentage and two shutouts. Berdin leads the AHL in wins and sits second in minutes played (877), shots faced (490) and saves (454).

Berdin is the second Moose player to earn CCM/AHL Player of the Week honours this month after Jansen Harkins was recognized during the period ending Nov. 3.

In recognition of being named the CCM/AHL Player of the Week, Berdin will be presented with an etched crystal award prior to an upcoming Moose home game.