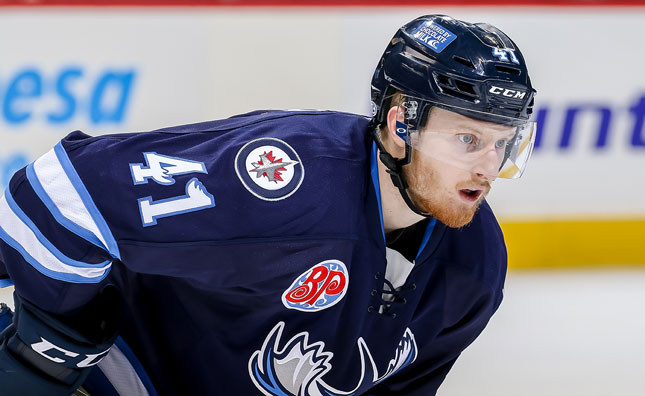 Connor was on fire in four games this week, scoring in all four outings, as the Moose went 2-1-0-1 through a Central Division road swing.  The Shelby Township, MI native posted eight points (6G, 2A) in the four contests to lead the AHL in goals and points through the week.  Connor started the week with a three point (1G, 2A) night in Rockford on Feb. 28, and was named the game’s first star.  He picked up first star honours again with a two goal effort against the IceHogs on March 3.  Connor tallied his fifth straight multi-point game with another two goal game on March 4 against the Milwaukee Admirals.  He rounded out the week with a goal in Chicago on Sunday.

The former University of Michigan standout has 10 goals in the last nine days and a total of 13 points over the six games included in that time.  Connor’s torrid pace pushed him into second on the Moose in scoring for the season with 31 points (18G, 13A) in 38 games.  His 18 goals lead the Moose and are tied for sixth among AHL rookies.

Connor was the Winnipeg Jets’ first round pick, 17th overall, in the 2015 NHL Entry Draft.  In addition to his time with the Moose this season, the first year pro has four points (1G, 3A) in NHL 19 games with the Jets.

In recognition of his achievement, Connor will be presented with an etched crystal award prior to an upcoming Moose home game.

Kyle Connor and the Manitoba Moose kick off an eight game home stand on Thursday, March 9 when they host the Charlotte Checkers in the first of a back-to-back set.  Tickets for the 7 p.m. CT matchup are available at moosehockey.com/tickets.