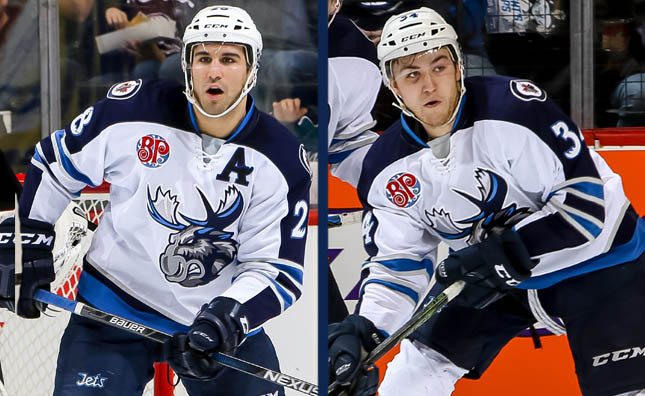 The Winnipeg Jets Hockey Club, in conjunction with its AHL affiliate, the Manitoba Moose, announced today they have recalled forwards Patrice Cormier and JC Lipon from the Moose.

Cormier, 25, is being recalled for the second time this season after playing one game with the Jets after being recalled on Nov. 4, 2015. This season with the Moose, Cormier has 12 points (6G, 6A) and 30 penalty minutes. Over his NHL career, Cormier has 5 points (1G, 4A) in 51 career games. He was originally drafted by the New Jersey Devils in the second round, 54th over-all at the 2008 NHL Draft.

Lipon, 22, has played 30 games for the Manitoba Moose this season, recording 17 points (8G, 9A) and 45 penalty minutes. This is Lipon’s third professional season after spending the last two years in St. John’s with the IceCaps. He has 84 points (22G, 62A) in 177 career AHL games. He was drafted by the Jets in the third round, 91st over-all at the 2013 NHL Draft.

The Moose will face the Charlotte Checkers on Sunday afternoon at 4:30 p.m. CT at the Bojangles Coliseum.