Fans celebrate the return of the Moose at Home Opener 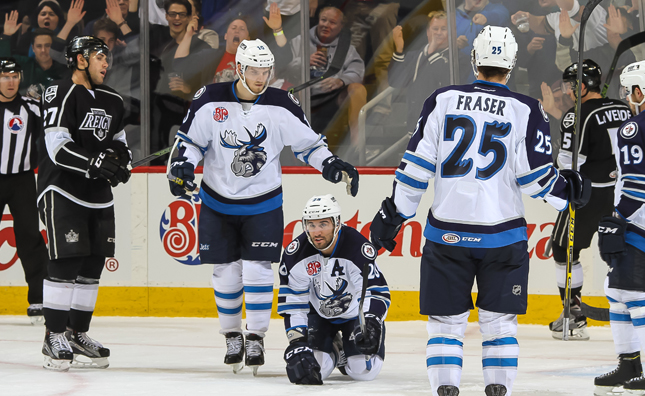 The Manitoba Moose returned to the MTS Centre for the first time since 2011 when they hosted the Ontario Reign before a Home Opener sellout crowd of 8,812.

The Reign, who were AHL Champions last year when they played as the Manchester Monarchs, scored the game’s first goal when defenceman Jamie McBain made a failed pass that hit the skate of Moose forward Joel Armia and went into the back of the net.

Patrice Cormier scored the first goal for the Moose in their return to Winnipeg on a powerplay in the third period, but it was too late as Manitoba fell 4-1.

Reign forward Michael Mersch led the way for Ontario with two goals, the second on an empty Moose net with just under two minutes remaining in the third.

Connor Hellebuyck had another solid effort in net for the Moose who were outshot 25-17.  Peter Budaj, who played for the Winnipeg Jets affiliate in St. John’s last season made 16 saves for the win.

Prior to the game Moose alumni Mike Keane, Jimmy Roy and Wade Flaherty dropped the ceremonial first puck in a special pre-game ceremony commemorating the history of the team.

The Moose will next play on Saturday night, Oct. 17, against the Reign in a rematch of Thursday night’s game. Puck drop is at 7 p.m. CT at the MTS Centre.