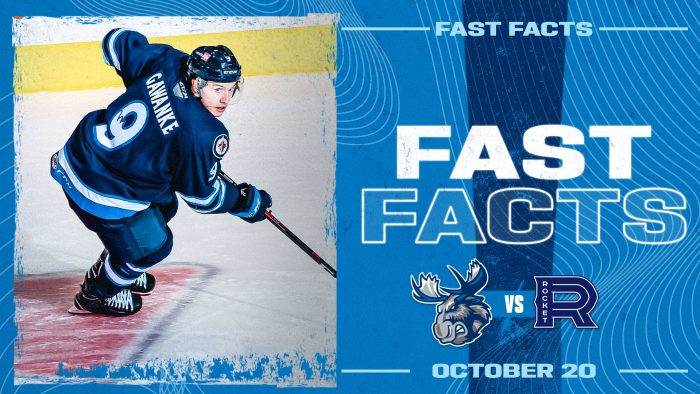 Fresh off a 5-0 win over the Toronto Marlies, the Moose try to make it two in a row tonight at 6:30 p.m. CT. This evening’s test is the Laval Rocket, who also split their opening weekend games. Listen to the game at CJOB.com/sports or MooseHockey.com/LISTENLIVE. Watch the game with a subscription to AHLTV.com. Coverage begins at 6:15 p.m. CT.

Johnathan Kovacevic posted a goal and an assist in Sunday’s victory to take the early scoring lead for the Moose. Kovacevic has three points (1G, 2A) in the team’s first two outings. The 2017 third round pick found his offensive touch last season, recording 11 points (2G, 9A) in his final 10 games of the campaign.

Forward Greg Meireles opened the scoring on Sunday by scoring his first AHL goal for his first AHL point. He then followed up the goal with the secondary assist on Johnathan Kovacevic’s second period tally to record his first multi-point game. Meireles signed with the Moose this summer after racking up 24 points (10G, 14A) in 31 games with the ECHL’s Greenville Swamp Rabbits last season. The Ottawa, Ont. product was a sixth round pick of the Florida Panthers in 2019.

Goaltender Mikhail Berdin stopped all 18 shots he faced on Sunday for his fifth career shutout. It’s the first time Berdin hung a zero on the board since he posted shutouts on consecutive nights on Nov. 8 and 9, 2018. The shutout moves Berdin into a tie for eighth on the Moose all-time list, even with Michael Hutchinson, Eddie Lack and Drew MacIntyre. Through two games, Berdin holds a 2.02 goals-against average and a .907 save percentage.

The Moose got contributions from everywhere in their 5-0 victory in Toronto on Sunday. Five different scorers found the back of the net while 11 players had at least a point in the win. Out of the 11 players, just Johnathan Kovacevic and Greg Meireles had multiple points (1G, 1A). The Moose also saw 15 of 18 skaters record at least a shot on goal in the win while 10 skaters had multiple shots on goal.

Off-season additions have made a good early impression through two games. Mikey Eyssimont leads the team with two goals, scoring one in each game this past weekend. Meanwhile, Austin Poganski and Greg Meireles both picked up their first goals in antlers on Sunday. Forwrads Luke Johnson and Evan Polei also checked in with their first points as Moose, tallying assists.

Moose Head Coach Mark Morrison earned his first win as an AHL head coach on Sunday with the 5-0 victory in Toronto. It was Morrison’s first official win as a head coach since the 2010-11 season when he was the head coach of the ECHL’s Victoria Salmon Kings. Morrison worked as an assistant coach in the NHL and AHL the next 10 seasons before taking on the head job with the Moose this season.