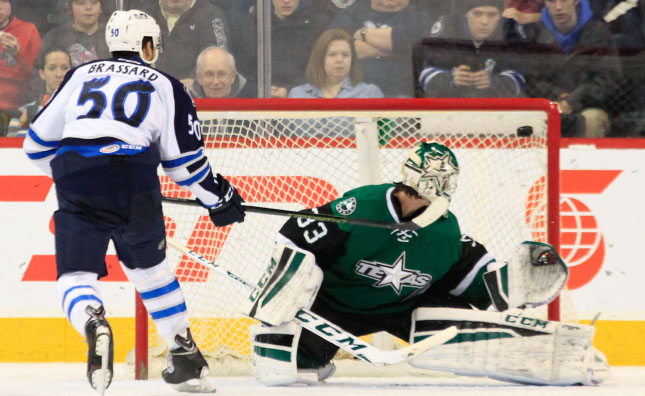 The Manitoba Moose take on the Texas Stars in their third of four meetings this season. The Stars lead the season series 2-0-0-0 with the Moose picking up a single point from a shootout loss in the season series.

The last time the Moose played a regular season match-up at the Cedar Park Center was back on Dec. 7, 2010. The Stars won that game 5-2 with the game winner being scored by Sean Backman (now with the Ontario Reign). Cody Hodgson and Evan Oberg scored for the Moose that night.

Manitoba finished February with it being their best month of the season posting a record of 6-5-1-1 and started off March with a win last night. The Moose now have a record of 6-3-1-0 in their last ten games, with each of their losses in that stretch coming by just a single goal. In their last six wins the Moose have outscored their opponents 27-9.

Heck of a Goalie:

The Moose continue to get spectacular goaltending from Connor Hellebuyck. He recorded his second shutout of the season last night in San Antonio and now has eight total in his two seasons in the AHL. Hellebuyck now has a 4-3-0 record since returning from the Winnipeg Jets on Feb. 12. In those seven games he has a 1.73 goals against average and a .946 save percentage. On Wednesday, Hellebuyck was one of three goaltenders named to the Team North America U-24 team for the World Cup of Hockey 2016.

Chase De Leo has been a consistent offensive threat for Manitoba all season. The La Mirada, California native has 15 goals and 16 assists for 31 points and has played in all 57 of Manitoba’s games so far this season. He is one of just four rookies in the AHL who lead their respective team in scoring. De Leo sits tied for 17th among all AHL rookie scorers. Texas Stars rookie Jason Dickinson is off to a great start to his AHL career. He sits third on the Stars in scoring and tied for second among all AHL rookies with 19 goals and 25 assists for 44 points in 59 games. Dickinson has more points than anyone in the Moose – Stars season series having scored three goals and two assists for five points in the first two games of the series.

Third-year forward Austen Brassard continues to impress in his breakout season. He has well surpassed his career highs in goals (13), assists (16) and points (29). Brassard extended his point streak to three games last night with his 13th goal of the season and added an assist later in the game. The native of Windsor, Ontario now has three goals and three assists for six points in his last three games. His shooting percentage is now 23.2%, among the best in the league.