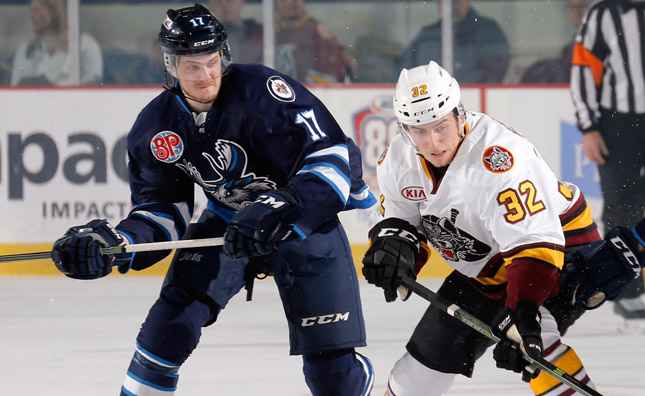 The Manitoba Moose face the Chicago Wolves in the fifth of eight meetings between these two clubs this season. The Wolves hold the edge in the season series 3-0-1-0, but the Moose won the last meeting on Nov. 13 with a dramatic overtime victory in Winnipeg.

The Moose and Wolves have played some tight hockey games in each of their previous four meetings. Chicago had the upper hand in the first three with wins of 3-1 (Oct. 30), 2-0 (Nov. 1) and 5-3 (Nov. 12). Manitoba finally broke through in the two team’s last meeting on Nov. 13.  Jiri Fronk tied the game midway through the third period and Joel Armia had a thrilling overtime breakaway goal to give the Moose the 3-2 victory.

Thomas Raffl scored his first career AHL goal in the first period on Tuesday night in Milwaukee. The native of Villach, Austria earned his first goal in his fifth career AHL game. He missed thirteen games after being injured in the season opener, Tuesday was his fourth game back in the lineup.

John Albert scored his first goal of the season on Tuesday against Milwaukee and it was the game winning goal. He has now scored nine career game winning goals with the Moose franchise dating back to his four years with the team in St. John’s. He moves into a tie for ninth on the all-time franchise list for career GWG’s.