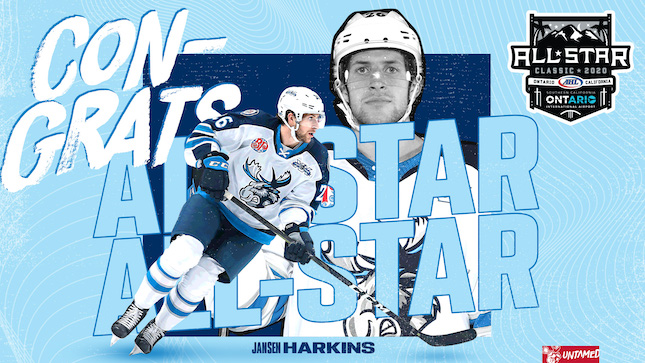 The Manitoba Moose Hockey Club, in conjunction with the American Hockey League, are proud to announce forward Jansen Harkins has been named to the 2020 AHL All-Star Classic presented by the Ontario International Airport. The annual showcase will be held January 26-27 in Ontario, Calif.

Harkins, 22, leads the Moose and is tied for eighth in AHL scoring with 31 points (7G, 24A) in 30 games this season. The North Vancouver, B.C. native has been on recall with the Winnipeg Jets since Dec. 18 and has two assists in six games with the NHL club. Harkins is enjoying a breakout season, having matched his AHL career high in points and setting a new career high in assists, all in 40 less games than 2018-19. The Jets second round pick in 2015 was named the CCM/AHL Player of the Week for the period ending Nov. 3 and went on to capture CCM/AHL Player of the Month honours for November. Harkins tallied 24 points (4G, 20A) in November, which were the most by an AHL player in a month since December 2016. He was just the fifth player since the 2009-10 season to record at least 24 points in a single month.

The AHL’s All-Stars will be divided into four division-based teams for the 2020 AHL All-Star Challenge on Monday, Jan. 27. The teams will participate in a round-robin three-on-three tournament featuring six games of 10 minutes each. The two teams with the best records at the end of the round-robin face off for the championship, a six-minute game also played at 3-on-3.

The Moose are in action this weekend against the Colorado Eagles at Bell MTS Place. The teams clash at 7 p.m. CT this evening, and rematch Saturday at 6 p.m. for Star Wars Night. Tickets for both games are available at moosehockey.com/tickets.