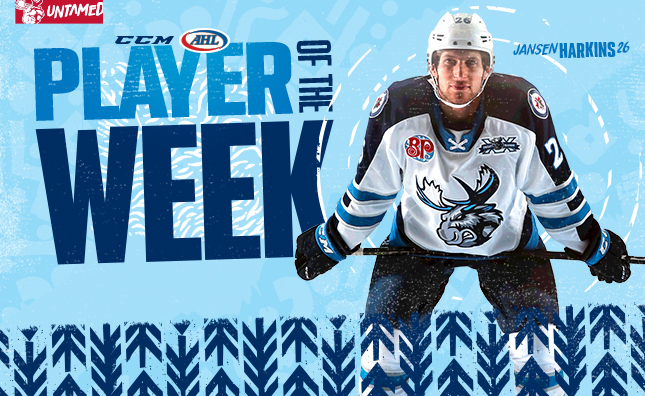 The American Hockey League announced today Manitoba Moose forward Jansen Harkins is the CCM/AHL Player of the Week for the period ending Nov. 3, 2019.

Harkins, 22, led the league in scoring this week, racking up eight points (1G, 7A) and a plus-five rating in two games as the Moose picked up a pair of wins over the Grand Rapids Griffins. The North Vancouver, B.C. product assisted on all five Moose goals and was named the game’s first star as Manitoba claimed a 5-3 win on Saturday. The five assists were the most by a Moose player during the franchise’s time in the AHL, and tied the overall franchise mark set by Brett Hauer during the 1999-00 season. His five helpers are also the most accumulated in a game by an AHL player so far during the 2019-20 season.

Harkins followed up Saturday’s performance with three points (1G, 2A) on Sunday as the Moose won 7-4 win against the Griffins. He scored Manitoba’s third goal of the day, before assisting on the game-winner and an insurance tally.

In recognition of being named the CCM/AHL Player of the Week, Harkins will be presented with an etched crystal award prior to an upcoming Moose home game.

The Moose head out on a three-game road swing this week before returning home to face the Texas Stars on Monday, Nov. 11. For more information about Manitoba Moose Season Seats, Mini Packs, 10-Ticket Flex Packs or to purchase single-game tickets, visit moosehockey.com/tickets.