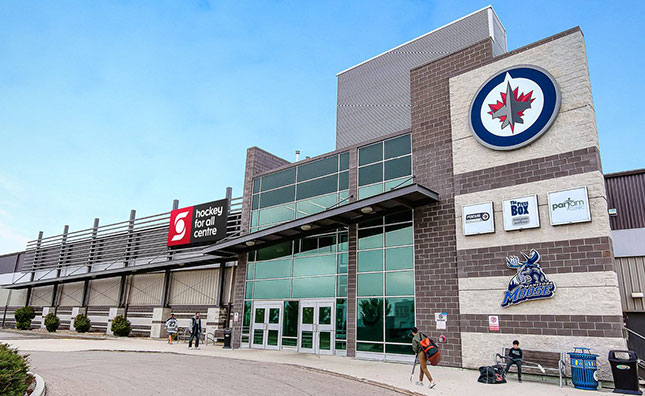 True North Sports + Entertainment and Scotiabank are proud to announce a new partnership that will see True North’s four-rink multiplex located just outside Winnipeg’s west Perimeter Highway renamed to hockey for all centre, effective today – Nov. 14, 2022. Scotiabank launched the hockey for all platform in 2021 as a multi-year commitment to drive diversity, equity, and inclusion in the game by breaking down cultural and financial barriers. hockey for all centre will be an inclusive and accessible facility, with programs for underserved communities, including free Learn to Play programs, subsidized equipment opportunities, and signage updates throughout the venue.

Since opening in August 2010, True North’s multiplex facility has been Manitoba’s community hockey home – a cornerstone of ice sports in Winnipeg that supports all levels of youth hockey programming. The facility provides over 11,000 hours of ice time annually for a variety of programs, community play, teams, leagues, and tournaments that allow all members of the community to participate in the sport. All youth involved in minor hockey at any level visit hockey for all centre at least once each hockey season, adding to the more than 500,000 players and spectators that enter the facility each year.

Programs include Jets Hockey Development – which seeks to provide professional hockey development for players of all ages and skill levels, from beginner to NHL and Olympic athletes, along with ringette programming, and the Winnipeg Jets Hockey Academy (WJHA) – a True North Youth Foundation play-based program that uses hockey to help underserved youth learn the values of team play and excel in school.

In partnership with Jets Hockey Development, Scotiabank will provide funding for a new Learn to Play program dedicated to introducing young new Canadians to the game, and to increasing diversity in the sport. More than 100 children will be able to take part in this free programming each year, with three multi-week sessions held throughout the year. hockey for all centre will work with local newcomer and cultural organizations to promote and facilitate participation. All participants will receive equipment courtesy of Scotiabank that they will be able to keep, encouraging their continued participation in the game.

“Sport is a powerful tool that not only brings the community together, but creates community,” said Dwayne Green, Executive Director of the True North Youth Foundation. “Every day through our Winnipeg Jets Hockey Academy, we see the positive impacts of hockey on youth, and especially how hockey can build that sense of belonging that is so important for new Canadian families to feel at home in their new country.”

“When we launched hockey for all in 2021, we made a commitment to making impactful change and eliminate barriers to make Canada’s game more inclusive,” said Laura Curtis Ferrera, Chief Marketing Officer, Scotiabank. “hockey for all centre is an important step forward in this commitment, as an accessible and inclusive place for the community to enjoy. We are very proud to partner with True North Sports + Entertainment to make this facility and its programming possible.”

Along with being the official practice facility of the Winnipeg Jets and Manitoba Moose, several Junior, Minor, Senior and high school hockey teams including the Winnipeg Freeze, Balmoral Hall Blazers, St. Paul’s Crusaders, St. Mary’s Academy Flames, and more call the facility home. hockey for all centre is the home of the Manitoba Women’s Junior Hockey League – the only junior hockey program for females in Manitoba – and, as one of the only fully accessible sledge hockey arenas in the province, it’s also the home of Sledge Hockey Manitoba. The Winnipeg Jets Challenge Cup – a premier tournament hosted at hockey for all centre for the past 12 years – will introduce a sledge hockey exhibition game during its 2022 tournament to bring more awareness to the sport. The 17 Wing Military Hockey League plays out of hockey for all centre, and it is also a premier facility of the Winnipeg Rec Hockey League.

With a focus on growing the game among females, the facility has been a partner in the Winnipeg Jets Gender Equality Month initiatives, hosting free presentations and skills sessions to expose more young girls to the game. In 2022, the facility hosted its first-ever all-female goalie camp with head instructor 2022 Olympic Gold Medalist Kristen Campbell.

“We’re thrilled to partner with Scotiabank, an organization that shares our passion for the game and puts significant effort into ensuring hockey is welcoming for everyone,” said hockey for all centre General Manager David Sattler. “We’re equally proud to wear our heart on our sleeve with a facility name that reflects our values and showcases a shared commitment to diversity and access to Canada’s favourite sport. hockey for all centre has been, and will continue to be, just that: a place where everyone can enjoy the competition, exercise, and community that hockey brings.”

As programming continues to grow and diversify, hockey for all centre also looks forward to welcoming participants and spectators from around the world as the host venue for the sport of hockey for the 2023 World Police and Firefighter Games – the second largest sporting event in the world, second only to the Summer Olympics.

About hockey for all centre

Scotiabank is a leading bank in the Americas. Guided by our purpose: “for every future”, we help our customers, their families and their communities achieve success through a broad range of advice, products and services, including personal and commercial banking, wealth management and private banking, corporate and investment banking, and capital markets. With a team of over 90,000 employees and assets of approximately $1.3 trillion (as at July 31, 2022), Scotiabank trades on the Toronto Stock Exchange (TSX: BNS) and New York Stock Exchange (NYSE: BNS). For more information, please visit scotiabank.com and follow on Twitter @Scotiabank.