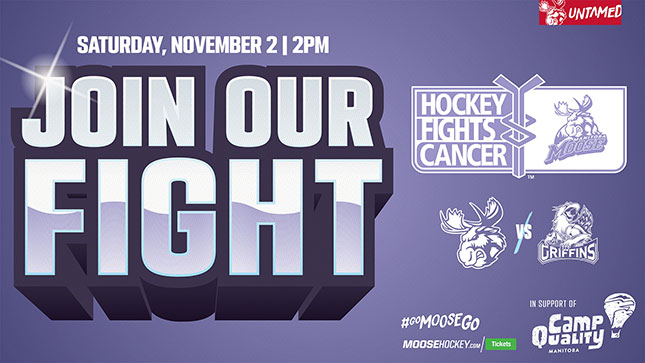 The Manitoba Moose host their second annual Hockey Fights Cancer (TM) (HFC) game on Saturday, Nov. 2 when the team faces the Grand Rapids Griffins. The day features a lavender game presentation, including rinkboards and visual media, to draw more awareness to the cause.

The Moose have supported the Winnipeg Jets’ HFC campaign since their return to Winnipeg in 2015, and the 2018-19 season marked their first independent campaign in support of a unique charity. Once again, Camp Quality Manitoba, an organization that provides free camp experiences, programming and support for children with cancer and their families, will be the benefactor of the Moose HFC campaign.

Fans can support Camp Quality Manitoba through the purchase of mystery autographed Manitoba Moose hockey pucks during the game. Following the game, from Nov. 28-Dec. 8, a HFC-themed Moose goalie mask will be part of an online auction at auctions.nhl.com with proceeds also going toward the cause. The Nov. 2 game’s 50/50 proceeds will be donated to Camp Quality, courtesy of the True North Youth Foundation.

As a non-profit organization, Camp Quality Manitoba runs on the energy of volunteers. New funds raised through the Moose HFC campaign will be essential in supporting young campers, from ages 4 to 18.

Since 1998 Hockey Fights Cancer, a joint initiative of the NHL and NHL Players’ Association, has been uniting the hockey community in support of cancer patients and their families.