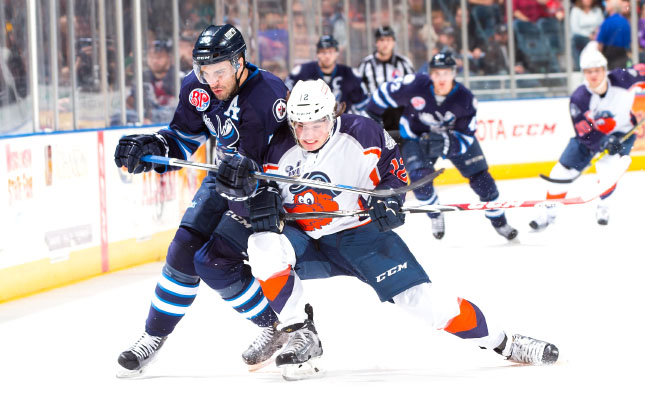 The Manitoba Moose keep on rolling.

They travelled to face the Milwaukee Admirals on Saturday night at the BMO Harris Bradley Center against a team riding a four-game home winning streak.

Playing their second game in 24 hours, in two different cities didn’t seem to faze the Moose against a fresh Admirals team who played their last game on Wednesday.

Manitoba continued their incredible play as of late putting together an impressive 4-1 against their division rivals.

The win extends the Moose winning streak to a season long four games.

The Moose have now earned at least one point in their last six games and in their last eight contests they have a record of 5-1-1-1.

Manitoba had goals from Brenden Kichton, Matt Halischuk, John Albert and Scott Kosmachuk to round out the scoring. Max Gortz opened the scoring for Milwaukee but that would be their only goal of the game.

Halischuk had another two point night for the Moose with a goal and an assist giving him multi-point efforts in three of his last four games. He has also scored three goals in his five games played against the Admirals this season.

John Albert recorded his fifth goal in nine games during the month of February. In total Albert has eight points in nine games this month.

The Moose had another terrific goaltending performance from Connor Hellebuyck. He picked up his third straight win since re-joining the Moose while making 30 saves in the game.

The Moose now lead the season series against the Milwaukee Admirals 4-1-0-1. The two teams will play twice more this season, both at the MTS Centre in Winnipeg on Apr. 5 & 6.