Moose play great but come up short to Wolves 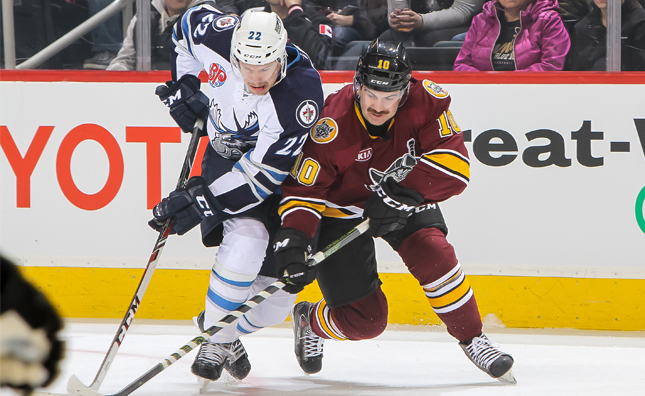 The Moose played arguably, in many ways their best game of the season on Thursday night against the top team in the Western Conference, the Chicago Wolves.

Despite a final score of 5-3 for the Wolves, this was a game the Moose deserved a better fate.

Three times the Moose rallied back and erased a Chicago lead, all of them with highlight style goals and two of them being extra special markers.

Chase De Leo opened the Moose scoring on a perfectly executed tic-tac-toe passing play set up by JC Lipon and Joel Armia in the first period.

In the second it was Patrice Cormier, who after serving a minor penalty, jumped out of the box and was sent in alone by Brenden Kichton. Cormier delivered on a beautiful deke for his second of the season.

Jiri Fronk tied the game for a third time in the third period with a spectacular breakaway goal of his own.

For De Leo and Fronk, the goals were their first of the professional careers.

After building lots of momentum in the third period things slipped away for Manitoba.

After Moose goaltender Connor Hellebuyck was shaken up after a collision in front, the Wolves scored two quick goals in a :90 second span with under eight minutes to play to pull away with the victory.

Chicago’s Jeremy Welsh led the way with two goals in the contest while Petteri Lindbohm, Evan Trupp and Ivan Barbashev had the other goals for the Wolves.

The Moose had a season high 36 shots and held an opponent to a season low 19 shots against.

If the first game was any indication, you won’t want to miss the rematch which goes Friday night at the MTS Centre. A big crowd is expected as part of “Share the Warmth” night presented by Red River Co-op.

Fans attending the game are encouraged to donate new or gently used winter wear as they enter the game. The clothes will then be distributed to those in need this winter season.