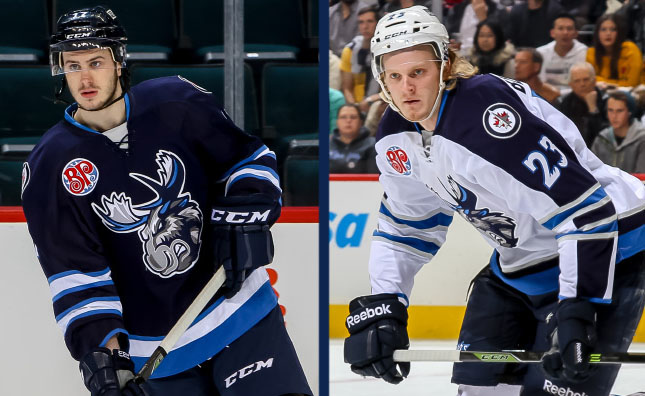 The Manitoba Moose hockey club announced today that they have recalled forwards Jimmy Lodge and Axel Blomqvist from their ECHL affiliate, the Tulsa Oilers.

Lodge, 20, has recorded one goal and seven assists for eight points in 13 games since he was assigned to Tulsa on Jan. 30. Previous to that, the Downingtown, PA native played 26 games for the Moose this year where he registered 12 shots on goal and two penalty minutes. He made his pro debut last season playing in one game for the St. John’s IceCaps of the AHL.

He was the Winnipeg Jets’ third round selection, 84th overall in the 2013 NHL Draft.

Blomqvist, 21, has played 25 games with Tulsa this season in two stints with the Oilers and has recorded five goals and five assists for 10 points. He has also played 14 games for the Moose this season registering 12 shots and two penalty minutes.

The Osby, Sweden native was signed to a three year NHL entry level contract by the Winnipeg Jets on Oct. 1, 2013.

The Moose will begin a two game home stand against the Charlotte Checkers on Saturday, Feb. 27 at 7 p.m. at the MTS Centre.