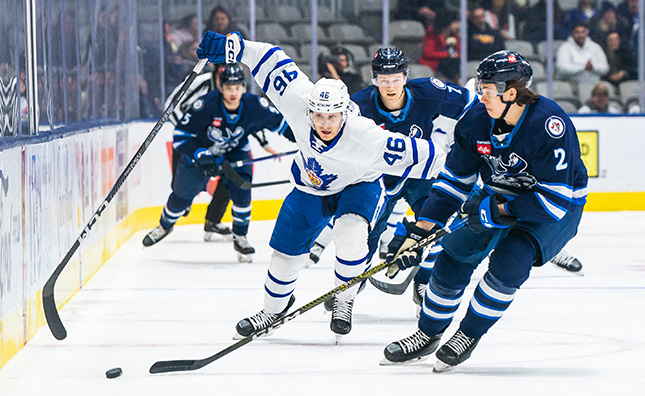 The Manitoba Moose (17-12-2-1) tangled with the North Division’s Toronto Marlies (23-9-1-1) on Wednesday evening at Coca-Cola Coliseum. Manitoba was coming off a 6-1 loss against Belleville on Saturday evening.

Manitoba opened the scoring just past the halfway point of the first period. Alex Limoges sprung Jansen Harkins, who skated in on Joseph Woll on a breakaway. The forward snapped a quick shot and found twine for the lead. Toronto fired back with a goal from Adam Gaudette that came off an odd-man rush. Oskari Salminen got a piece of the disc that eventually fell past his shoulder. Toronto then claimed the lead with a late goal from Logan Shaw. The forward was left alone in front and beat Salminen with a quick shot. The horn sounded to end the first with Manitoba down by a count of 2-1.

Manitoba evened the score on the man-advantage 2:47 into the second stanza. Limoges sent the puck to Jeff Malott, who quickly sauced it to Dominic Toninato in the slot. The forward wristed a shot that beat Woll from in tight. That was the only tally of the frame. Manitoba outshot Toronto 15-4 in the middle period and held a 2-2 tie after 40 minutes.

Toronto reclaimed its lead midway through the third with a power play marker of its own. Joseph Blandisi got the final touch on the disc at the side of the net and swept it past the outstretched pad of Salminen. The Moose netminder was later called upon to face not one, but two penalty shots, and was able to deny both Kyle Clifford and Joey Anderson. The Moose went searching for the tying marker and pulled Salminen in favour of the extra attacker. Manitoba managed to push the pace and pressured Toronto late, but Woll held strong and denied any chances he faced. The horn sounded to draw the game to a close with the Moose dropping the contest 3-2. Salminen was hit with the loss and made 28 saves, while Woll captured the win on the back of 30 stops.

“I thought we played well. Obviously they came out to a hot start and kinda took it to us early. We weathered the storm and then I thought we controlled the pace and played a pretty good game. Just came up short again.”

Manitoba rematches with the Toronto Marlies at Coca-Cola Coliseum on Friday, Jan. 13. Puck drop is slated for 6 p.m. CT. You can catch the game on CJOB.com/sports, the new Winnipeg Jets App, and AHLTV.