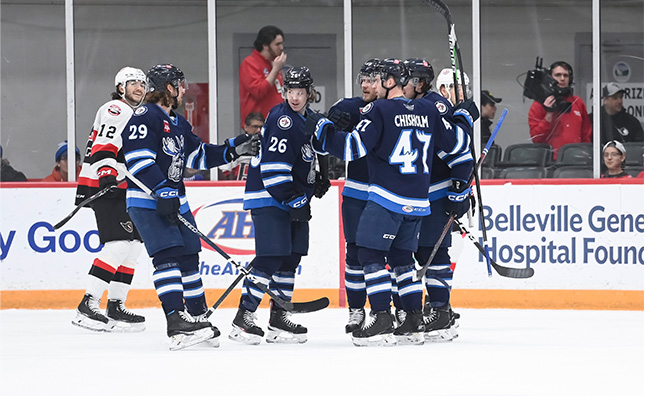 The Manitoba Moose (18-12-2-1) tangled with the North Division’s Belleville Senators (15-18-3-0) on Saturday evening at CAA Arena. The contest marked the end of a six-game road trip for the Moose.

Manitoba opened the scoring with seven minutes left in the first frame. Leon Gawanke fired a shot from the line and Dominic Toninato, who was hanging out in the high slot, tipped it past Mads Sogaard. That tally was the only one of the opening frame. Oskari Salminen stopped all four shots he faced in the first 20 minutes of play.

The Moose added to their lead in the second period. With Manitoba on the power play, Declan Chisholm shot the puck on goal. Jeff Malott, who was providing a screen in front, deflected it home for his team-leading 16th of the season. Manitoba outshot Belleville 8-4 in the middle period and held a 2-0 lead after 40 minutes.

Manitoba potted some insurance in the third with a goal from Tyler Boland. Alex Limoges found the forward, who streaked down the ice into the attacking zone before beating Sogaard with a snap shot. The Moose added another tally with a long shot from the half wing boards off the stick of Ville Heinola. Belleville got on the board halfway through the frame as Angus Crookshank took advantage of a giveaway and beat Salminen with a close shot. Belleville drew closer with a goal through traffic from Ridly Greig with three minutes left. The Senators pulled Sogaard and searched for extra offence, but the Moose held strong defensively and ate up the clock to end the contest. Salminen captured the victory and made 14 saves, while Sogaard absorbed the loss on the back of 19 stops.

“I thought we had a good start. I think we came out tonight and we tried to get the momentum and keep it in our favour. We were able to get one in the first and establish a lead, then after that we were able to hold it down.”

Manitoba returns home to clash with the Chicago Wolves at Canada Life Centre on Tuesday, Jan. 17. Puck drop is slated for 7 p.m. CT. Tickets to all upcoming Moose home games are available at MooseHockey.com/TICKETS.