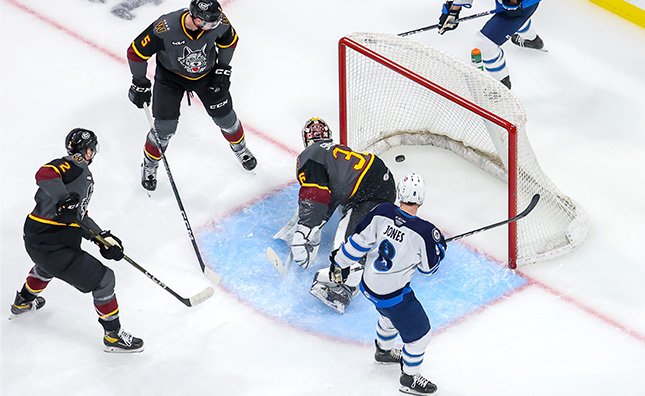 The Manitoba Moose (19-12-2-1) tangled with the Chicago Wolves (12-18-3-1) on Tuesday evening at Canada Life Centre. Manitoba was coming off a 4-2 win over the Belleville Senators on Saturday night.

Neither side was able to find twine in the first 20 minutes of play. Chicago was granted the lone chance on the man-advantage, but were unable to cash one in behind Oskari Salminen. The Moose netminder stopped all 10 shots he faced, while Zachary Sawchenko ended the frame with seven stops of his own.

Manitoba got on the board in the second period with goal from Nicholas Jones just prior to the five-minute mark. Isaac Johnson came across the line with speed and leaned into a hard shot that was stopped by Sawchenko. Jones followed the play and batted the puck out of the air and past the netminder to begin the scoring. The Jones tally was the only one of the frame. Manitoba took a 1-0 lead into the second intermission and were ahead in shots 16-13.

Manitoba added to their lead in the third period with a tally from Brayden Burke. Dean Stewart fired a shot toward the net and Burke got a stick on the puck to deflect it past Sawchenko to push Manitoba ahead 2-0. Chicago went searching for offence and pulled Sawchenko in favour of the extra attacker. Manitoba was able to hold on defensively and secure the win. Salminen captured the win and his second shutout of the season on the strength of 25 saves, while Sawchenko was hit with the loss and finished with 22 stops of his own.

Manitoba rematches with the Chicago Wolves at Canada Life Centre on Wednesday, Jan. 18. Puck drop is slated for 7 p.m. CT. Tickets to all upcoming Moose home games are available at MooseHockey.com/TICKETS.