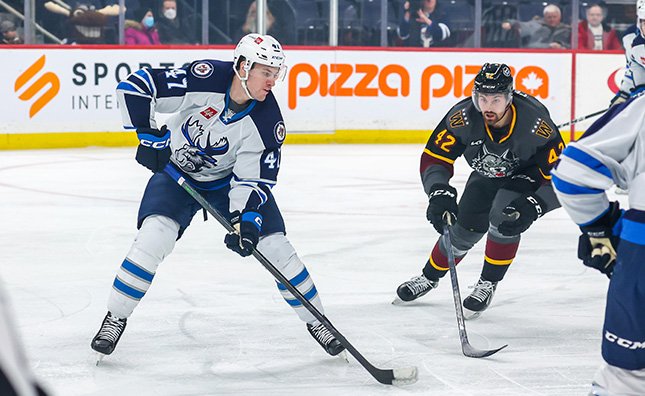 The Manitoba Moose (19-13-2-1) rematched with the Chicago Wolves (13-18-3-1) on Wednesday evening at Canada Life Centre. Manitoba was coming off a 2-0 win over the Wolves yesterday night and had won two straight.

Chicago got on the board before the period was three minutes old. Jack Drury took advantage of a turnover behind the Moose net and beat Oskari Salminen with a snap shot in front. The Wolves pushed further ahead with a goal from Tuukka Tieksola five minutes later. The forward tipped home the shot from Anttoni Honka past a screened Salminen. Manitoba cut into the Chicago lead with a goal from Leon Gawanke. The defenceman controlled the puck at the blue line before unleashing a shot through traffic that snuck past Pyotr Kochetkov. Chicago restored the two-goal lead with under a minute left. Malte Stromwall took the shot and the rebound was kicked out to Nathan Sucese, who quickly found twine. Manitoba headed to the dressing room down 3-1 after 20 minutes of play.

Chicago added to its lead in the middle frame. Brendan Perlini intercepted a pass at the blue line and went in alone against Salminen before beating the netminder with a low shot. The Wolves tally was the lone marker of the frame. Manitoba was outshot 13-3 in the middle frame and found themselves down by three heading into the second intermission.

The Wolves pushed ahead in the third with an early power play tally from Ryan Suzuki. The Moose responded with a goal from Brayden Burke. The forward lifted a shot on goal that deflected off a stick and found twine for his second marker in as many games. Chicago added a sixth goal to the board halfway through the final frame with a tally from Joseph LaBate to finish off the 6-2 win. Salminen took the loss and finished with 30 stops, while Kochetkov notched the win and ended with 19 saves.

“They were obviously getting a lot more shots through tonight. We didn’t have as much traffic in front. Penalties too, and then we didn’t have a single power play while they had three or four, and they capitalized on a few of them. That pays off for them. Bounces weren’t going our way and I don’t think we played nearly as good.”

Manitoba takes on the Texas Stars at Canada Life Centre on Saturday, Jan. 21 for 2000’s Day, featuring a hat giveaway for the first 3,000 fans in attendance. Puck drop is slated for 2 p.m. CT. Tickets to all upcoming Moose home games are available at MooseHockey.com/TICKETS.