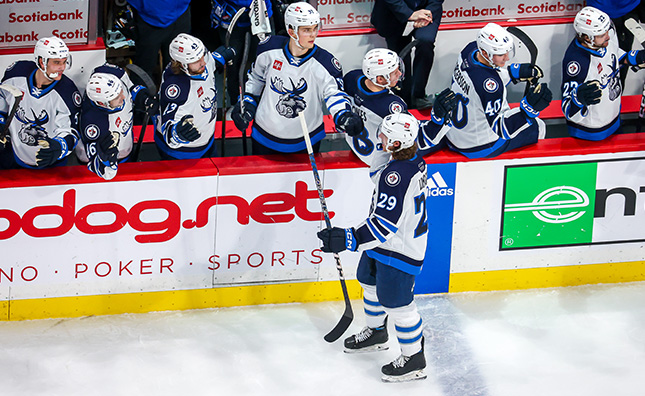 The Manitoba Moose (20-13-2-1) took on the Texas Stars (22-8-5-2) on Saturday afternoon at Canada Life Centre. Manitoba was coming off a 6-2 loss against the Chicago Wolves on Wednesday evening.

Texas opened the scoring with under 10 minutes to play in the first. With the Stars on their second power play, Matej Blumel took a pass and one-timed it up and over the shoulder of Arvid Holm. The tally was the lone marker of the first stanza. Manitoba trailed 1-0 at the first intermission and was outshot 12-8.

Manitoba tied the contest at the halfway point of the middle stanza. A bouncing puck in the offensive zone was seized by Daniel Torgersson. The forward moved to the high slot and unleashed a hard shot that beat Texas netminder Matthew Murray. Texas reclaimed its lead with a goal from Thomas Harley. The defenceman walked to the slot and fired a backhand shot that squeezed past Holm. The Moose once again tied the contest, this time on a power play of their own. Declan Chisholm grabbed the puck and sped into the zone. The defenceman sauced a perfect feed across the crease that was tapped home by Alex Limoges. Manitoba took the lead off a tally from Tyler Boland a couple minutes later. Limoges found the forward with a slick feed that Boland roofed past Murray. Manitoba outshot Texas 10-8 in the middle frame and led 3-2.

Manitoba added some insurance early in the third. Limoges streaked down the wing on an odd-man rush and found Boland who beat Murray from the opposite dot. It was the forward’s second of the contest for a 4-2 lead. Texas pulled within a goal with a tally from Marian Studenic as the forward beat Holm under the arm with a shot off the rush. Texas tied the contest 4-4 with a shot off the stick of Will Butcher with 5:15 to play. Neither side was able to find the winner as time ticked down to end regulation and send the contest into overtime. In the extra frame, Limoges found Declan Chisholm who blasted a slap shot under the bar to secure the victory. Holm took the win and ended the game with 22 saves, while Murray was tagged with the loss on the back of 26 stops.

“Overall I thought we did well compared to how we did on Wednesday against Chicago. I thought we did really well, they’re a tough team to play against and I’m just proud of our group and our resiliency when they tied it up. We still kept a level head and we strong enough to win it.”

Manitoba rematches with the Texas Stars at Canada Life Centre on Sunday, Jan. 22 for Jimmy Oligny bobblehead day. The first 3,000 fans in attendance will receive the mini bobblehead of the captain. Puck drop is slated for 2 p.m. CT. Tickets to all upcoming Moose home games are available at MooseHockey.com/TICKETS.