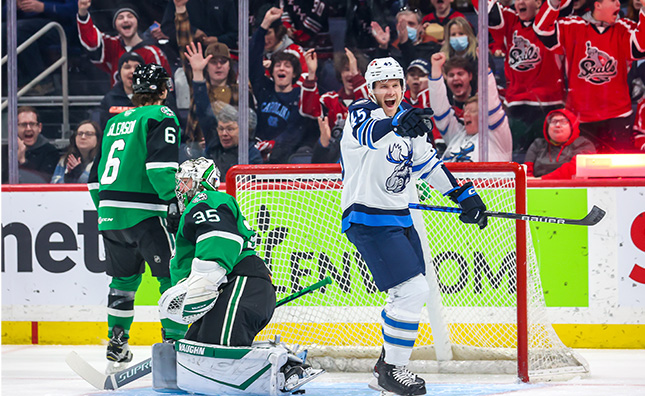 The Manitoba Moose (21-13-2-1) rematched with the Texas Stars (22-8-6-2) on Sunday afternoon at Canada Life Centre. Manitoba was coming off a 5-4 overtime win against the Stars yesterday afternoon.

Manitoba opened the scoring 5:12 into the first frame. Tyler Boland retrieved the puck and fired a pass to Alex Limoges, who snapped the puck toward the net. Dominic Toninato was waiting in the slot and redirected it past Anton Khudobin. Manitoba struck again 21 seconds later. Henri Nikkanen put the puck on net where it ricocheted behind Khudobnin. Daniel Torgersson was waiting on the side of the and whacked home the tally. The Moose edged further ahead three minutes later with a goal from Leon Gawanke. Declan Chisholm sent the puck across the blue line where Gawnake hammered it home. The tally brought an end to Khudobin’s day, as the netminder was pulled in favour of Matt Murray. Texas got on the board with four minutes left in the first. Defenceman Oskari Laaksonen fired a hard slap shot past Oskari Salminen after a Texas offensive zone draw win. Manitoba took a 3-1 lead to the first intermission, but was outshot 16-15 through 20 minutes.

Texas pulled within a goal in the middle frame with a tally from Thomas Harley. The defenceman ended a rush by sending the puck past Salminen. The only power play chance of the frame was granted to the Stars, but Salminen and the Moose stood firm. Texas outshot Manitoba by a count of 12-9 in the middle frame, but the Moose held a 3-2 lead into the break.

Texas tied the contest late in the third period. Riley Barber fired a hard shot past Salminen to cash in on the Stars’ third power play chance. Neither side was able to find the winner as time ticked down to end regulation and send the contest into overtime for the second straight day. In the extra frame, the puck squeezed out to Toninato, who was alone in front. The forward fired a quick shot that beat Murray 44 seconds into overtime and pushed the Moose to victory. Salminen took the win and ended the game with 36 saves, while Murray was tagged with the loss on the back of 21 stops.

“That was a big two points right there. Obviously they were a really good team, they’re leading our division in points right now. Big statement from us to see where we were at playing against the best team. Huge two points.”

Manitoba tangles with the Toronto Marlies at Canada Life Centre on Friday, Jan. 27. Puck drop is slated for 7 p.m. CT. Tickets to all upcoming Moose home games are available at MooseHockey.com/TICKETS.