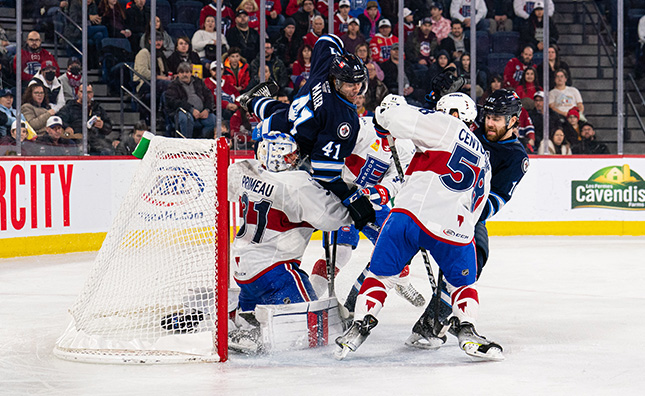 The Manitoba Moose (17-10-2-1) rematched with the Laval Rocket (13-15-4-1) on Friday evening at Place Bell. It was the second of two weekday contests between the two sides. Manitoba was coming off a 6-3 loss against the Rocket on Wednesday.

Manitoba opened the scoring with just under seven minutes remaining in the first frame. Cayden Primeau played the puck in front of the net where it was stolen by Dominic Toninato. The forward quickly fired it into the empty net for the early lead. The tally was the only one through the first 20 minutes of play. Arvid Holm was solid in the Moose net and racked up 12 total stops to keep the visitors ahead as the first intermission hit.

Manitoba struck in the middle stanza to push further ahead. Cole Maier rushed down the ice and pulled the puck around a Rocket defenceman. The forward continued on toward the net and Evan Polei was there to tip the puck home. The Moose edged further ahead with a goal from Wyatt Bongiovanni just 74 seconds later. The forward skated into the zone and fired a shot on Primeau. The rebound squeaked past his pad and Bongiovanni tapped it into the open net as it hit the blue paint. Manitoba outshot Laval 13-11 and carried a 3-0 lead as the horn sounded to end the stanza.

Laval got on the board early in the third with a tally off the stick of Alex Belzile. The forward’s shot hit the post and found twine past Holm. Manitoba reclaimed its three-goal lead with the third of the season from Daniel Torgersson. Tyler Boland found the forward all alone with a great feed that was snapped into the back of net. The Rocket went hunting for offence and pulled Primeau with six minutes to go. The gamble paid off and resulted in a tally from Belzile on a redirect at the side of the goal. The Rocket pulled Primeau once again and converted another tally, this time from Corey Schueneman. With under a minute to go, the Rocket looked to tie the contest. The squad pulled Primeau for the third time and found the tying marker with 25 seconds left off a scramble in front from Rafael Harvey-Pinard. The game sat 4-4 through regulation.

The Moose bounced back in overtime to grab the win. Alex Limoges found Jansen Harkins alone in front and the forward fired it past Primeau to power the Moose to the win. Holm captured the win on the strength of 37 saves, while Primeau ended the night with the loss on the back of 30 stops of his own.

Manitoba continues its road trip with a contest against the Belleville Senators at CAA Arena on Saturday, Jan. 7. Puck drop is slated for 6:05 p.m. CT. You can catch the game on 680 CJOB, CJOB.com/sports, the new Winnipeg Jets App, and AHLTV.