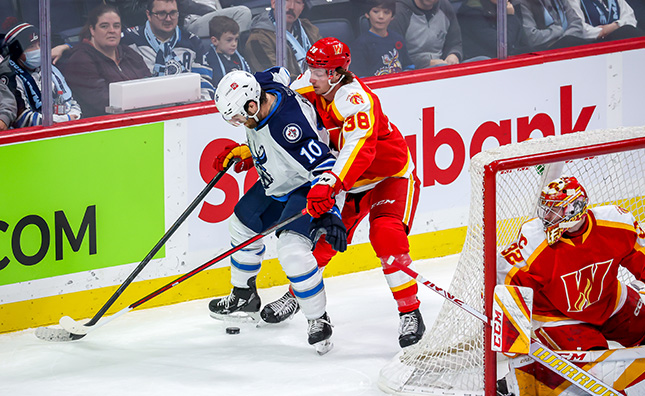 The Manitoba Moose (6-3-1-0) took on the Calgary Wranglers (6-5-0-0) Friday evening at Canada Life Centre. It was the first of two games on the weekend between the Moose and Wranglers. Manitoba was coming off a 2-1 overtime victory against Texas the previous Sunday.

Calgary opened the scoring in the first. With Manitoba on the penalty kill, Cole Schwindt found space in tight near the Manitoba crease. The forward was able to lift a shot that eluded Oskari Salminen and give the visitors the edge. The Moose netminder dug down after and ended the first with 11 saves, while Dustin Wolf, who made 12 stops in the opening 20 minutes, kept the Moose off the board as the first period expired.

Calgary pushed further ahead to begin the second. With the Moose in the box, Schwindt planted himself off to the side of Salminen and swiped in a rebound for his second of the contest. The Calgary marker was all the offence in the middle frame. The Moose retired to their dressing room down by a pair, but even with 20 shots apiece.

Calgary added to its lead in the third with a highlight-reel tally from Walker Duehr. The Moose struck back two minutes later with a goal from Jeff Malott. Kevin Stenlund found the forward on a slick passing play and Malott knocked the shot past Wolf to get the Moose on the board. Manitoba pulled within one 25 seconds later as Evan Polei tipped home a Ville Heinola point shot. The Moose pushed for the tying goal as the period wore down and pulled Salminen in favour of the extra attacker. Despite the extra Moose skater on the ice, Calgary held strong for the 3-2 win. Salminen was hit with his second loss and smothered 22 total pucks, while Wolf notched the victory and ended with 24 stops of his own.

“Tough. Really good game from our side in general. I don’t think we made that many mistakes to lose the game. There were a couple lucky bounces on their part on the power play and its back in our net. It’s tough to come back in the third period when you’re losing 3-0. We didn’t quit, we gave our everything and we were almost there you know.”

Manitoba and Calgary duke it out once again at Canada Life Centre on Sunday, Nov. 13. Puck drop for is slated for 12 p.m. Tickets to all upcoming Moose home games are available at MooseHockey.com/TICKETS.