Moose Recap: Manitoba 4 at Texas 3 SO 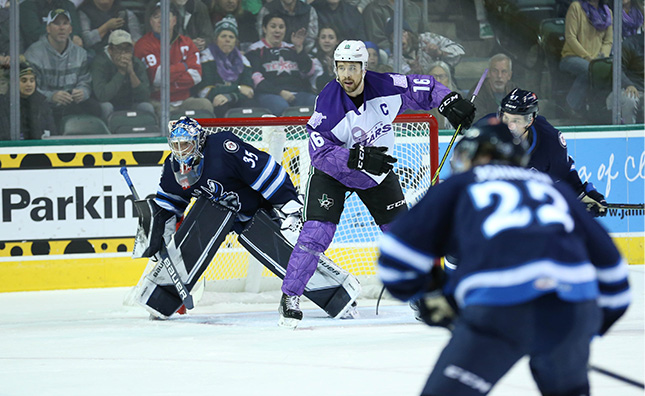 The Manitoba Moose (8-3-2-0) rematched with the Texas Stars (7-5-2-2) Saturday evening at H-E-B Center. It was the second of two straight games on the weekend between the Moose and Stars. Manitoba was coming off a 6-5 overtime loss against Texas the previous night.

Manitoba opened the scoring with its first shot of the contest for the second straight game. Greg Meireles grabbed the puck behind the Stars net before walking out front and stuffing it home just 18 seconds in. Wyatt Bongiovanni added to Manitoba’s lead shortly after, as the forward tapped home a Daniel Torgersson centering feed that slid through the crease. Manitoba kept pressing and Alex Limoges scored his fourth of the season on a wicked shot that was whipped low blocker past Adam Scheel. The third goal in under five minutes chased the Stars netminder and brought Matt Murray on in relief. Texas got on the board with a goal from Jacob Peterson with under five minutes to play in the first. The Stars then pulled within a goal as Rhett Gardner flung a backhanded try on net where it hit a Moose defender before being redirected past Oskari Salminen. A frantic opening frame saw the Moose take to their dressing room ahead 3-2.

Neither Manitoba or Texas was able to find any offence in the second frame. Both sides were granted chances on the man advantage, but Salminen and Murray were both up to task and turned away all opportunities they faced. The Stars led the way with 11 shots in the middle frame and put 28 total on board. The Moose held the 3-2 lead as the second stanza came to a close.

Texas tied the contest in the third. Ben Gleason walked off the half boards and stepped into the slot before unleashing a backhand that eluded Salminen. The Stars tally was only one of the third frame and both sides geared up for their second overtime in as many days. It was Manitoba’s third straight contest heading into the extra frame. The Moose controlled the majority of the overtime period and outshot Texas 4-1, but neither side could find the winner and a shootout was needed. Tanner Kero scored off the hop for Texas before Brad Lambert drew the Moose even. The Stars chance from Riley Damiani was stopped by Salminen and set up Isaac Johnson, who beat Murray up high off the far post to give the Moose the 4-3 victory. Salminen finished with 39 saves and notched the victory, while Murray made 15 stops in relief for Texas.

“Obviously we got the quick lead early there. They responded with those two. It was a gritty road win. They’re coming all game and Oscar played great in net. We found a way. Our penalty kill stepped up. We held down the fort. They had their chances but like I said, Oskari played great. We gotta find way to win on the road and that was a great character win for our team.”

Manitoba continues its road trip with a date against the Milwaukee Admirals at UWM Panther Arena on Tuesday, Nov. 22. Puck drop for is slated for 7 p.m. You can also catch the game on CJOB.com/sports, the new Winnipeg Jets App, and AHLTV.