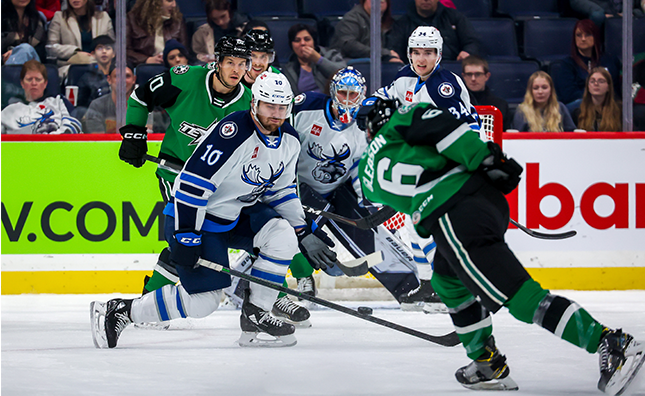 The Manitoba Moose (5-2-1-0) grappled with the Texas Stars (5-3-0-1) on Friday evening at Canada Life Centre. It was the first of two games on the weekend between the Moose and Stars.

Texas opened the scoring in the first on the man advantage. Riley Barber skated in and shot the puck past a screened Arvid Holm to give the visitors a 1-0 lead. The Moose responded 17 seconds later when Dean Stewart uncorked a blast that fired past Anton Khudobin. Texas reclaimed its lead later in the stanza after Jacob Peterson pounced on a rebound and snapped the puck to the back of the net. As the period wore on, Texas added to their lead with a tally from Marian Studenic. His second of the season gave the Stars a 3-1 cushion. Manitoba trailed on the scoreboard after the opening frame despite leading in shots by a count of 14-11.

The Moose began the second frame with a different netminder between the pipes as Oskari Salminen took the crease. With under five to play in the stanza, the Stars struck again. Ben Gleason fired a shot on the power play that went past Salminen’s glove and gave the Stars a 4-1 edge. The marker on the man advantage was the only scoring in the period as the horn droned to draw the period to a close with Texas leading 4-1.

Neither side was able to find twine in the third and final frame. Manitoba carried the pace of play and outshot Texas by a 16-5 count, but were unable to nudge any pucks past Khudobin. The Moose dropped the game by a score of 4-1 on Friday evening. Holm was hit with the loss and ended with eight saves prior to getting pulled in favour of Salminen. Khudobin registered the win and finished the contest with 36 saves for his third win of the campaign.

“I thought the third was definitely better. We knew that the first two weren’t good enough. We talked about it and we’re going to practice tomorrow and clean up some things. We get them again on Sunday, so we’ll just adjust some things and come out stronger.”

Manitoba and Texas clash again at Canada Life Centre on Sunday, Nov. 6. Puck drop for is slated for 2 p.m. Tickets to all upcoming Moose home games are available at MooseHockey.com/TICKETS.