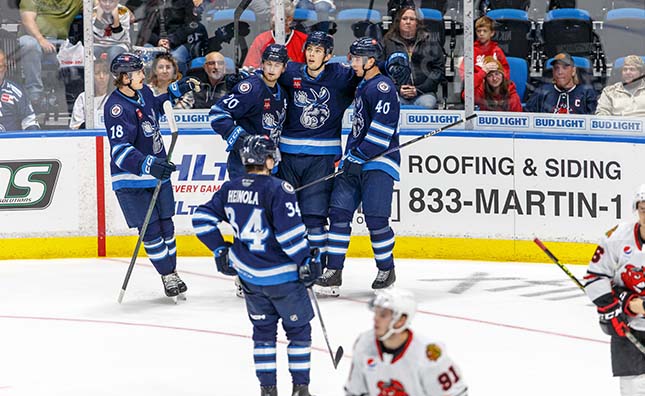 The Manitoba Moose (4-0-1-0) continued their first road swing of the season when they took on the Rockford IceHogs (1-3-0-0) on Sunday afternoon at BMO Center. It was the third game in three nights against Central Division foes for Manitoba.

Rockford opened the scoring before the game was five minutes old. Brett Seney took advantage of a two-on-one break and slid the puck past Oskari Salminen to push the home side ahead 1-0. It was the first time this season that Manitoba surrendered the opening goal of the contest. The Moose fought back and tied the game late in the frame. Ville Heinola gathered up the puck and put a shot on Dylan Wells. Jansen Harkins jumped on the rebound and tied the game with a hard shot. Manitoba took a 1-1 tie into the first intermission. Shots were even at eight for both sides.

Manitoba grabbed the lead in the middle stanza. Ashton Sautner sealed the wall and directed a shot on net. Jeff Malott was cruising in front and tipped the disc past Wells for his second goal in as many games and a 2-1 Moose lead. Manitoba kept the pressure on and found twine once again. Daniel Torgersson dragged the puck through the crease and Henri Nikkanen skated in late and swatted the puck in to make it 3-1. The Moose converted again shortly after, as Declan Chisholm wired a shot from the blue line on the power play. The Moose added a second power play tally moments later. This time it was Kevin Stenlund finding twine and pushing the Moose ahead 5-1. Manitoba was able to score three goals in 2:28 of action to take a commanding 5-1 lead after 40 minutes.

When Manitoba took the ice in the third period, there was a new goaltender in to face them in the form of Jaxson Stauber. Rockford scored an early tally, as Luke Philp beat Salminen with a hard shot along the ice. Manitoba responded 20 seconds later as Mikey Eyssimont uncorked a snap shot that eluded Stauber and gave Manitoba a 6-2 advantage. Rockford fired back and capitalized on a two-on-one rush that saw Seney score his second of the contest to make it a 6-3 game. The horn sounded to end the game, with the Moose claiming their third road victory in a row. Salminen finished with his third win of the season and 28 stops, while Wells was tagged with the loss and made 16 saves of his own.

“There were a couple slow starts in there but I think we’re figuring out our systems. I think once everybody got up to speed, with that many games it can be hard to get those quick starts. You’re finding your legs and there’s a lot do travel and everything. We did a great job of sticking to our systems and getting better as each game went on and the weekend went on and I think it’s a good start to the season for us.”

The Moose  return home for games Saturday, Oct. 29 and Sunday Oct. 30 against the Iowa Wild at Canada Life Centre. Puck drop for both game is slated for 2 p.m. Tickets to all upcoming Moose home games are available at MooseHockey.com/TICKETS.