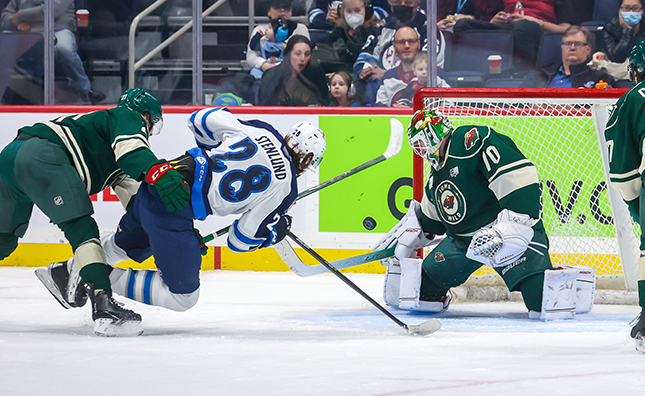 The Manitoba Moose (4-1-1-0) returned home and clashed against the Iowa Wild (1-2-0-2) on Saturday afternoon at Canada Life Centre. It was the first of two straight games on the weekend between the Moose and Wild.

Iowa opened the scoring just shy of the five-minute mark of the opening frame. Nick Swaney took advantage of an errant Moose pass and flipped a shot over the glove of Oskari Salminen to give the visiting Wild a 1-0 lead. Manitoba fought back and tied the contest a few minutes later. The Moose were on a five-on-three power play as Ville Heinola rifled a shot that hit iron behind Iowa starter Zane McIntyre. The rebound popped free to the waiting Kevin Stenlund, who kicked the puck up to his stick and fired it home to tie the contest 1-1. Manitoba had the edge in shots by a count of 13-8 after 20 minutes.

Iowa grabbed a 2-1 lead in the second stanza. Joe Hicketts threw the puck in front after a good shift of Iowa pressure. The disc ricocheted off Steven Fogerty’s skate past Salminen to give the Wild their second lead of the contest. Iowa added to its total on the power play when Sammy Walker found space and wired a shot past Salminen to push the visitors ahead 3-1. The Wild recorded another power play goal off the stick of Walker in the final six minutes of the period to take a 4-1 lead to the third.

Manitoba pulled within a pair early in the third period. Mikey Eyssimont dislodged the puck from McIntyre behind the net and Jansen Harkins tucked home the loose puck to make it a 4-2 contest. With the Moose trailing late, Salminen was pulled in favour of the extra attacker. Adam Beckman blocked a shot and skated the puck forward before hitting the empty net to ice the game 5-2. Salminen was hit with his first loss of the season and finished with 15 saves, while McIntyre captured the win and made 33 stops.

“It’s a little frustrating. We’ve had many games lately where we’ve been scoring pretty easily. These kinds of games are going to happen. I thought we played well enough to win. They capitalized on their chances and sometimes it’s just how it goes.”

The Moose suit up tomorrow, Sunday Oct. 30 against the Iowa Wild at Canada Life Centre. Puck drop for is slated for 2 p.m. Tickets to all upcoming Moose home games are available at MooseHockey.com/TICKETS.